Mahama Will Scrap Free SHS, Don't Vote For Him – Chief Of Staff 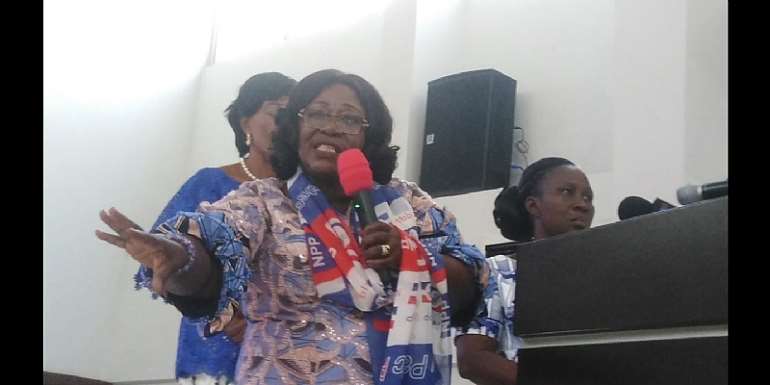 The Chief of Staff, Frema Osei-Opare has urged Ghanaians to keep the National Democratic Congress (NDC) and its flgabearer Former President Mahama in eternal oppositon to prevent Mahama from scrapping the Free SHS programme.

According to her, the Former Head of State does not believe in the policy and has no future plans of continuing it.

Speaking on the theme ‘Women Poised To Retain Power For 2020 and Beyond’ at the Greater Accra Regional Women Organizers’ Conference in Accra, Frema Osei-Opare said “John Mahama has no positive intentions for this policy. He will scrap it just as he did with others. Maintain he and his party in opposition".

The Chief of Staff pleaded with Ghanaians to keep calm assuring that President Akufo-Addo will fulfill all campaign promises.

Former Member of Parliament for Tema West, Irene Naa Torshie Addo called for a ‘Yes’ vote in the upcoming referendum slated for December 17.

She said “The era where Presidents appoints MCEs or DCEs are over. The citizenry now have the power to elect into office who they believe can do the job. Whether the winner is an NPP or NDC, it is the decision of the masses”.

She also added that the time has come for Ghana to move to its democratic era and make sure everything is self-ruled.

She further mentioned that the Akufo-Addo government is poised on working with all manners of persons regardless of their political affiliation for a better Ghana.

She added that what men can do, women can also do better adding that the various positions in the party are opened to women.

“From Party Chairman, NASARA, Secretary, Organiser, Treasurer among others are all opened to women. All are eligible to compete with the men however; no man can contest for the position of National Women Organiser,” Kate Gyamfua emphasised.

She charged the women to contribute their quota towards nation building.

Madam Kate Gyamfuo stressed that if the party were able to stay in opposition for thirty (30) years, she is hoping, the NDC will maintain its current position for 40 years.

“We were the first to discover oil in Ghana, introduced MASLOC among others of which the previous government had no clue of that but our failure as a team cost us the Presidency to our opponents who have misused and mismanaged the natural asset,” she noted.

The National Women’s Organiser also called on followers of the party to retain the NPP in 2020 and beyond.

She however disclosed that a National Women’s Rally will be held next year after the second edition of National Women Organizers’ conference has been held.

He noted that women are an integral part of every campaign and there is the need to include them in politics.

“We are going to depend on them for the 2020 elections and we know they can do better because they are very dedicated,” he stated.

He noted that although the involvements of women in African politics are low, he believes through affirmative action, the President will continue to promote more females to government.

He advised women to take up roles and not wait till they are called up before they contribute their quota to the development of the country.

The women's conference was graced by some Queen mothers.