'Killing without any reason': Deaths in rural Ethiopia spark outcry 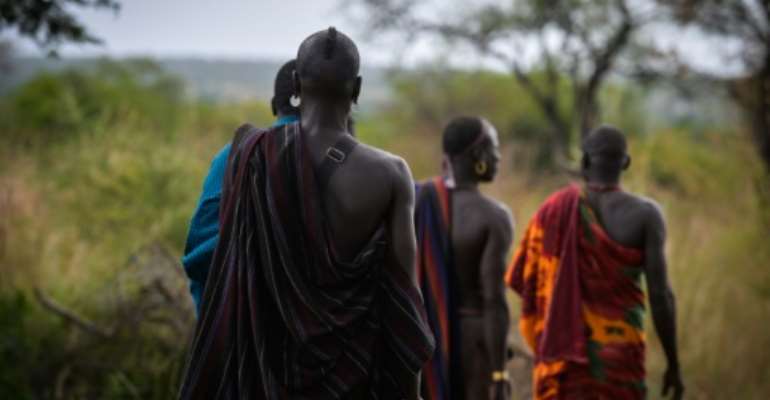 For decades, herders in Ethiopia's Lower Omo Valley have relied on guns to fend off rivals as well as hyenas and lions roaming the forests and plains.

But over the past month, security forces have embarked on a campaign of forced disarmament that pastoralist leaders say has been accompanied by shooting of civilians, mass detentions and beatings.

Witness accounts from the Lower Omo Valley bolster critics who contend that Prime Minister Abiy Ahmed -- named the winner of this year's Nobel Peace Prize -- is presiding over a deteriorating security situation, worsened by the actions of the military and police.

The violence is unfolding ahead of elections next year in one of the country's most volatile and ethnically diverse areas: the Southern Nations, Nationalities, and Peoples' Region.

Elders from the Bodi community, the main group earmarked for disarmament in the Lower Omo Valley, told AFP nearly 40 people had been killed as of mid-October but the toll could be far higher.

Officials deny this account and defend the disarmament campaign as crucial for peace in this sensitive region.

"They are killing without any reason," said Shegedin, a Bodi elder who was detained for several days and asked that his full name not be used because he feared reprisals.

"They just go to the villages, and if you run they start shooting."

Government and security officials in Jinka, the administrative centre for the South Omo zone, said the disarmament campaign was necessary to secure state development projects including sugar plantations in the area.

But as reports of abuses multiply, human rights groups and researchers who work in the region are calling for investigations.

"The accounts I have seen are sufficiently shocking and come from sufficiently reliable sources to make it imperative that they are investigated by an internationally respected human rights organisation," said David Turton, an anthropologist at the University of Oxford who has worked in the region for 50 years.

Failure to investigate "will only add to suspicions that the accounts we've heard are in fact accurate", he said.

Tensions between the Bodi and the government are long-running, fuelled by Bodi anger at what they describe as the loss of their land to Ethiopians resettled from other regions and to development projects like the Gibe III dam and sugar plantations.

But the elders said the latest violence represents a major escalation.

They said Bodi men and women detained in the town of Hana had been deprived of food and forced to stand for hours in the sun.

They accused security forces of digging up the buried remains of a Bodi spiritual leader and shooting them.

And they said security forces shaved off the hair of one man who had grown it long following the death of his brother -- a traditional Bodi mourning custom -- and forced him to eat it.

"We've never seen anything like this," said Shegedin, one of three Bodi elders who spoke with AFP.

Federal security forces assumed control of the Southern Nations, Nationalities, and Peoples' Region back in July.

The move followed weeks of unrest resulting from a bid by the Sidama ethnic group to form a new regional state.

Ten other groups are pursuing similar statehood bids, and it is unclear how the government plans to respond to them.

Security in the ethnic patchwork of the Lower Omo Valley is crucial to the government in light of plans to install 100,000 hectares (250,000 acres) of sugar plantations there along with processing factories.

Troops and federal police are among those participating in the disarmament operation, said Lore Kakuta, an adviser to the chief administrator in Jinka.

Violence in the volatile region is a major challenge for Ethiopian Prime Minister Abiy Ahmed, who was awarded the 2019 Nobel Peace Prize last week. By EDUARDO SOTERAS (AFP/File)

Lore said disarmament was the only option following unprovoked shootings by the Bodi targeting sugar plant workers -- allegations that the Bodi elders denied.

Lore said he could not comment on reports of human rights abuses.

"We don't know what the security forces are doing," he said. "Actually, that's not our job."

A senior police official in Jinka, who spoke to AFP on condition of anonymity because he was not authorised to discuss disarmament, disputed claims that Bodi people had been killed.

"The allegations that dozens of Bodi have been killed is false," he said.

Other groups on edge

As of early October, the disarmament of the Bodi was "90-percent finished", Lore said.

He added that the operation could be expanded to include the Mursi, another agro-pastoralist community based in the area.

A traditional hut in the Mago National Park, home to the Mursi and the Bodi communities. By MICHAEL TEWELDE (AFP)

A Mursi leader, who spoke on condition of anonymity for safety reasons, said he was concerned that tactics used against the Bodi would be repeated against his people.

"Now the Mursi are all worried because maybe the police will come and kill us," he said.

Laetitia Bader of Human Rights Watch said the Ethiopian government had a history of using violence and intimidation to force vulnerable communities from their land.

"The federal government should take measures to ensure that any disarmament efforts are not perceived as a continuation of this heavy-handed approach," she said.

The authorities should also consult with local communities and ensure that alleged abuses by its forces "are immediately investigated," Bader said.