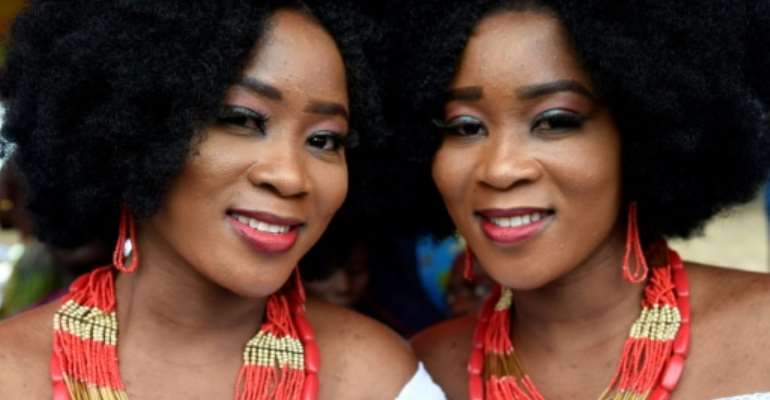 The Nigerian town of Igbo-Ora says it has the highest rates of multiple births anywhere in the world. By PIUS UTOMI EKPEI (AFP)

The sign greeting visitors at the entrance of Igbo-Ora in southwest Nigeria welcomes people to a place unlike anywhere on the planet: "TWINS CAPITAL OF THE WORLD".

The rather sleepy-looking town boasts of having the highest concentration of multiple births of any place on the globe.

To celebrate its self-proclaimed title the town hosts an annual festival, now in its second year, that draws hundreds of sets of twins from around the country.

Donning different traditional clothes and costumes, the twins -- male and female, old, young and even newborns -- sang and danced at the latest edition this weekend to the appreciation of an admiring audience.

"We feel elated that we are being honoured today," Kehinde Durowoju, a 40-year-old twin, told AFP as he hugged his identical brother Taiwo. 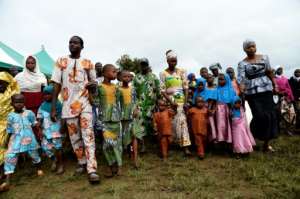 Parents lead children at a parade of twins at the Igbo-Ora festival. The one-day event draws families from across Nigeria. By PIUS UTOMI EKPEI (AFP)

"With this event, the whole world will better appreciate the importance of Ibeji (twins) as special children and gifts from God."

Around them, twins moved in procession to show off their colourful outfits as magic displays and masquerades also entertained the crowds.

Population experts say the Yoruba-speaking southwest has one of the highest twinning rates in Nigeria.

Statistics are difficult to come by, but a study by British gynaecologist Patrick Nylander, between 1972 and 1982, recorded an average of 45 to 50 sets of twins per 1,000 live births in the region.

That compares to a twin birth rate of 33 per every 1,000 births in the United States, according to the National Center for Health Statistics.

Igbo-Ora is the epicentre of the phenomenon in the West African country.

Residents in the town, some 100 kilometres (60 miles) north of Nigeria's biggest city Lagos, say that almost every family has some twins.

"I am a twin, my wife is a twin and I have twins as children," he told AFP.

"There is hardly any household in this town which does not have at least a set of twins."

He said the festival on Saturday was aimed at promoting Igbo-Ora as "the foremost twins tourism destination in the world" and that efforts were underway to get the town listed in the Guinness Book of Records.

Prominent Yoruba ruler, the Alaafin of Oyo, Oba Lamidi Adeyemi, said the festival "is a celebration of culture and recognition of Ibeji as special children in Yorubaland". 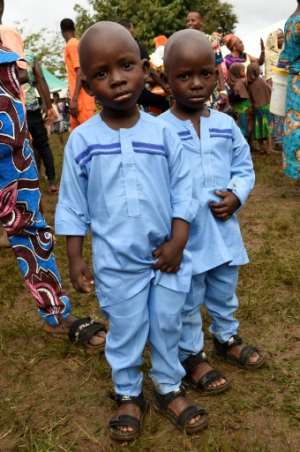 Local people say the high number of twins is due to their diet -- scientists are sceptical. By PIUS UTOMI EKPEI (AFP)

He said the birth of twins usually "heralds peace, progress, prosperity and good luck to their parents," adding that parents should always take good care of them.

But while twins are seen as a blessing by many today that has not always the case in parts of southern Nigeria.

In pre-colonial times twins were often regarded as evil and were either banished to the "evil forest" or killed.

Scottish missionary Mary Slessor is widely credited with helping to curb the practice in the late 19th century.

Scientists have not said definitively why Igbo-Ora has such a high number of twins.

But local residents have a theory that it is down to the diet of women in the town. 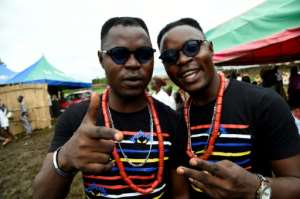 Yams are believed to contain gonadotropins, a chemical substance that helps women to produce multiple eggs.

"The water we drink also contributes to the phenomenon," Adeleye added.

Fertility experts are sceptical -- and point to another explanation.

They say there is no proven link between diet and the high birth rate, with the same food being consumed across the region.

"I think the gene for multiple births is in the region and this has been passed on from generation to generation."