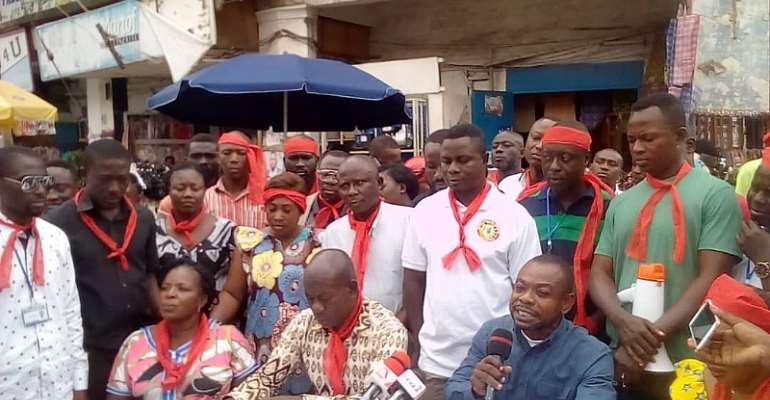 According to the group, they received several cases of harassments from custom officials at various entry ports to the region to re-examine their goods after paying all the necessary duties.

“All import values used in and generating import duties are under- invoiced by ally businessmen from Ashanti and on that score, all consignment from all our entry ports to Ashanti region ought to be re-examined. These goods are offloaded at customs yard under the mercy of the weather and unreasonable loses are incurred to the detriment of the ordinary trader”

The aggrieved traders are asking weather the inception of the paperless system to eliminate human interference and also to bring sanity at the various entry ports have not achieved its desired goals.

GUTA in a press conference held on Tuesday in Kumasi claimed that, they have also received reports that authorities at KMA have sold out some of the stores to foreign nationals.

“We have heard that some foreigners have made purchase of stores at the newly constructed Kejetia market, we want to warn KMA that if we see any foreigners at the facility when it’s opened for trade, the worse thing will happen and it won’t be easy for KMA and government”

They said, their efforts to curtail foreign nationals from engaging in retail businesses have proven futile due to lack of political will on the side of government.

GUTA is anticipating that, Ashanti region is becoming a ghost town without any brisk business if care is not taken to remedy the situation.

BUSINESS IN ASHANTI REGION UNDER SIEGE/ATTACK

Ghana Union of Traders Association (GUTA) received countless reports Trom all members which is the parent body of all sector associations has persistent and unjustifiable harassment meted out to custom officials in the region. Upon further checks, interrogations and consultations, these were the revelations and findings:

1. We believe the Ministry of Finance directed and instructed them to embark on this special exercise on the premise and pre-conceive idea that, out of the total tax generated from all the regions in Ghana, Ashanti region contributes only 3%, which is lower to Techiman in the Bono East Region as has been confirmed by honorable Deputy Minister of Finance, Kwaku Kwarteng and his boss the hon Minister.

2. All import values used in computing and generating import duties are under- invoiced by all businessmen from Ashanti and on that score, all consignment from all our entry ports to Ashanti region Ought to be re-examined. These goods are offloaded at customs yard under the mercy of the weather and unreasonable loses are incurred to the detriment of the ordinary trader.

3. There is also the problem of post clearance audit which our checks has revealed that Ashanti region is unfairly targeted. The Trading Community and entire GUTA fraternity want to ask some pertinent and basic questions and demand answers from state institutions and government

1. Is the clearing of goods at our entry ports done by the ordinary trader?

3. Are there special training which customs officials at our entry port undergo whiles others assigned to embark on this harassment spree don’t have?

4. One will also ask, are the inception of paperless system and elimination of human interface to bring sanity at our entry port useless and have they not able to achieve the desire goals?

GUTA in Ashanti region wants to emphatically provide answers to them if they are listening. The answers are: NO! NO!! NO!!!

Complimentary to this problem are numerous agitations against foreigners engaging in retail trading.

All our efforts have proven futile and our engagements with government has not brought any meaningful headway since government does not have the Political Will. These foreigners have moved from Kumasi to surrounding areas such as Techiman, Obuasi, Ejura, Sunyani etc. engaging numerous buyers who were previously coming to Kumasi to transact business. On a more serious note, these foreigners who are also Operating in Kumasi are in bed with Ghana Revenue Authority (GRA) and do not pay required taxes sue them. A case in point was when Compliance Team was instituted in June 2018 by the Trade Minister, hon. Allan Kyeremateng which comprised of all these state agencies: Ghana Revenue Authority (GKAJ, Ghana Immigration Service (GIS), Ghana Standard Authority (GSA) Gh Union of Traders Association (GUTA).

There were serious infractions found with these Ghana Investment Promotion Center (GlPC) and Ghana Foreigners perpetuating in all manner of illegalities. A Nigerian who deals in phones and accessories (E- POWER at Acheamfour market was making a hooping daily huge sales which was paying Ghc18 as VAT returns every month where as legitimate Ghanaian competitors In the same business were paving Ghc1500 as VAT returns in a month. All these undermines our total tax generation in Ashanti Region which the state agencies are frowning on. There were reports which individual state agency compiled during Compliance Team Exercise and should have expedite action to sanitize the market but have been swept under the carpet contributing to low tax generation in the Ashanti region.

Aside this, most of the multi-national companies: Chinese, Indians, Lebanese operating in Kumasi have their head offices in Accra and file all their tax returns at their respective head offices.

To climax our woes are the shutdown of about five satellite markets including Kejetia for the past five years. Every business has “triumph card” and good will which is where your customers can continuously locate your business for a period of time. Kejetia market which was shut down for reconstruction has Just been opened and the enormous predicament traders have gone through for the past years cannot be underestimated. Most of our members have lost huge sums of money through this period of reconstruction. All these also contribute to low tax generation.

GUTA Ashanti, can say on authority that most of our members who were doing very well in Kumasi and have serious competitors have also moved to Accra. Most of their reports were ascribe to custom harassment meted out to them whereas their competitors don’t suffer same when their consignment are released from entry points to their final destination.

GUTA is calling on all well-meaning people residing in Kumasi to fight this well designed and deliberate attempt to cripple businesses in Ashanti region. GUTA is anticipating Ashanti region becoming a ghost town without any brisk business if care is not taken to remedy the situation.

GUTA also wants to caution government to make conscious effort for our domestic laws to work to the later in conclusion, traders in Ashanti region are crying and government ought to be careful because things are not well with us. Serious demonstration will be communicated to all Media Houses to press home our concerns if solutions are not found to these problems “DESTINY DEMONSTRATIONS”