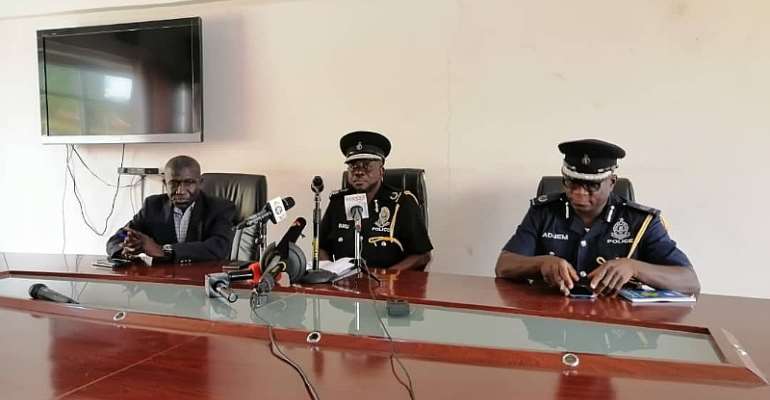 According to him, pockets of such are also referred to the Asantehene, Otumfuo Osei Tutu II who he noted deals with same rapidly.

Addressing the media in Kumasi, the Regional Commander posited that chieftaincy issues previously occupied space in the area of crime in the records of the Police.

The Commander, however, pointed to the collaboration between the Police administration and the Asantehene’s office to the reduction of such cases.

‘’I am happy to tell you that crime in the area of chieftaincy has reduced drastically and it is due to the effective administration of the Asantehene who now handles such issues for us’’, COP Duku confirmed.

GENERAL CRIME
According to the Police Commander, armed robbery where sophisticated weapons were used has gone down in the region.

Unlike previous years when such hard robbery was reported, the Police Commander said current cases that are reported are thievery and burglaries.

With these burglaries, the Commander says crime prone areas are being monitored by the patrol teams to nip same in the bud.

He revealed that robberies that happened mostly on the highways have also reduced to the barest minimum, adding that the Police are on the high alert on every route in the region.

GOVERNMENT
Commending efforts of the government, COP Duku explained that the provision of patrol vehicles has helped the Police to attend to their duties effectively.

Robbers who hitherto outsmarted them on the highways have suddenly gone into hiding since the Police got access to vehicles and weapons, the Commander noted.

The Police, the Commander revealed is visible on the routes in the Region and have access to vehicles to attend to emergency and patrol duties.

He however, charged the public especially taxi drivers to be wary on the road and scan through persons who board their cars at odd times.

‘’I will urge the public to volunteer information to us so that we can deal with all criminal tendencies as we also caution taxi drivers to be wary on the road at odd times’’, COP Duku cautioned.