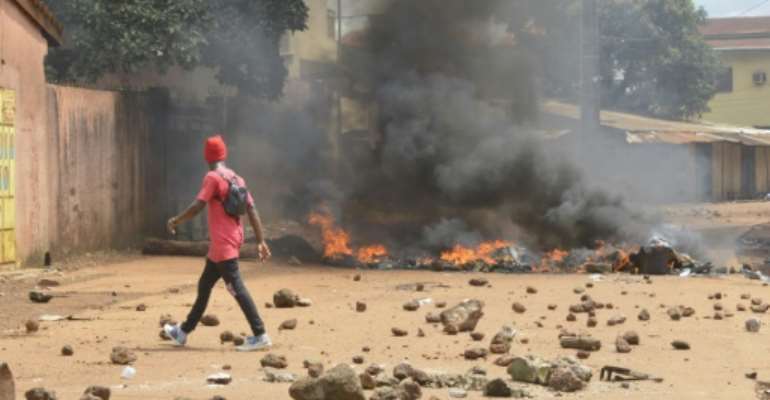 A young demonstrator was killed in violent protests in the Guinean capital Conakry on Tuesday, his father said, a day after five civilians and a policeman died in clashes.

Hundreds of youths in rundown districts on the edge of the city erected barricades, burned tyres and hurled stones at police, who responded with teargas, they said.

Residents in Cosa, Koloma and Bambeto districts said that troops and police had entered the areas to carry out arrests.

Authorities have refrained from confirming most of the protest deaths reported by family members and medical workers.

That unofficial toll rose to six on Tuesday with the death of Abdoulaye Timbo Sow, who was shot on Tuesday morning in district of Wanidara, his father Mamadou Aliou Sow told AFP, adding that he succumbed to his injuries in hospital.

Earlier, an opposition alliance of unions, opposition parties and civil society groups urged the public to pursue protests against President Alpha Conde, whom they accuse of seeking to lift constitutional blocks on a third term in office.

The National Front for the Defence of the Constitution (FNDC), on social media, called on Guineans to continue demonstrating "until the scheme for a third term is completely dropped and the electoral masquerade is stopped."

Relatives and health workers said late Monday that four demonstrators had been killed, a toll which rose to five on Tuesday with the death of a 27-year-old driver from gunshot wounds, according to his father and a doctor who had been treating him.

According to the authorities, two people were killed, one of them a policeman.

The protests were of limited scope, the government said, a version contested by the opposition, which maintained there had been "complete paralysis" of the country.

Conde, 81, is a former opposition figure who in 2010 became the poor West African state's first democratically-elected president, but his tenure has been marred by a crackdown on protests.

In September he called on the government to hold "consultations" on possible changes to the constitution -- a process that the opposition says is bogus.

He also told the public to prepare for a referendum and elections, stirring speculation that he is planning to scrap the country's two-term presidential limit and take part in elections due by late next year.

On Friday, the 53 opposition members in the 114-seat legislature withdrew from parliament in protest at what they termed moves by the government to "create a new constitution to remain in power."

About 100 people have been killed since Conde came to power in 2010, according to the opposition.