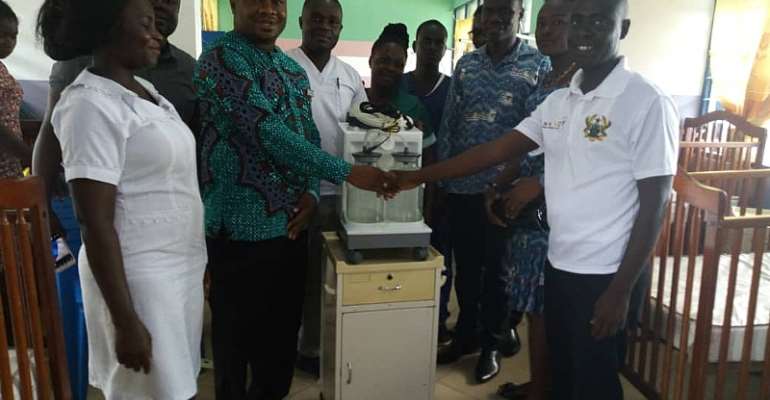 The Nation Builders Corps (NABCO) beneficiaries in Jomoro Municipality of the Western Region, have donated suction machine to Half Assini Government Hospital.

The donation forms part of their one year anniversary celebration of the beneficiaries across the country.

The donation provided an opportunity for the beneficiary to give back to society.

The Akufo-Addo-led government in 2018 employed over 100,000 unemployed graduates to render services in different modules of programs for the country.

The short and colourful ceremony took place at the Children's Ward of the Half Assini Government Hospital.

Making the presentation on behalf of the personnel, the Jomoro Municipal NABCO Coordinator, Mr. Dennis Awuah Ackah, said the move was to show appreciation and kind gesture to the government.

The Municipal Coordinator continued that "We would never relent in our efforts to continue donating as there is more blessing in giving and this would open more avenues financially for us''.

Mr. Awuah indicated that the personnel who hitherto, were languishing in poverty due to unemployment, decided to express their happiness by giving back to society.

He, therefore, seized the opportunity to commend the Akufo-Addo-led government for thinking about unemployed graduates in the country by creating over 100,00 jobs to reduce the unemployment situation confronting Ghana.

He said right now they could take care of their families, adding, all must applaud President Akufo-Addo for the programme.

He also advised the beneficiaries to work hard for government to sustain the programme to benefit others.

Dr. Frank Agbemordzi, a Medical Superintendent in charge of the Hospital, commended the team for the kind gesture.

The machine, which was for sucking clotted blood in cases of accident, sucking urine in bladders especially for the elderly persons and sucking liquids in noses of newly born babies, he added would help in relieving cases of that sort.

He noted that "This machine will help in successfully performing surgeries especially when blood oozes excessively, it can be used to suck the blood and will also be helpful for elderly men who find it difficult to urinate''.

On his part, the Medical Assistant in charge of the children's ward, Godfred Oteng joyfully received the item.

He said the machine would go a long way to help the hospital save moe lives.

"The machine has come at the right time and will facilitate in sucking of phlegms and saliva that may get stuck in the throat of unconscious patients who may be admitted at the Hospital for days without eating therefore causing suffocation'', he emphasised.