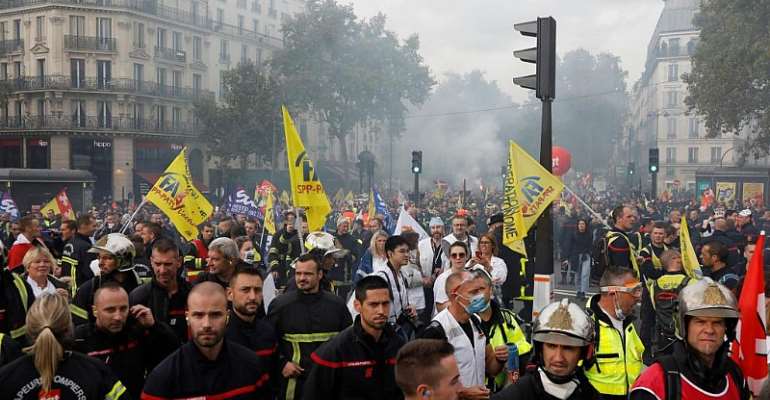 Thousands of French firefighters hit the streets of Paris on Tuesday to protest low pay and difficult working conditions and to ask for better guarantees of their pension benefits and ultimately greater respect for their profession. In response to their demonstration, police fired tear gas and water cannons.

Coming from all four corners of the country, the procession of professional firefighters “in anger”, rather than volunteers, began their protest at Paris' Place Republique in the afternoon amid a cacophony of sirens, whistles and smoke as they made their way to the southeastern point of place de la Nation.

Their protest comes two weeks after a similar one by police in the streets of the capital.

The firefighters came together to denounce the growing strains of understaffing and the lack of recognition of their profession in the face of surge of requests for help and assistance.

Wearing their navy uniforms and reflective helmets, many held signs that read “do more with less, welcome to the firefighters” or “stop the political contempt.”

Grievances
“There has been a drop in the number of people who are concerned when we are overwhelmed by the number of interventions we have to attend to,” explained Mathias Gosse, a 53 year-old firefighter in the southern city of Grasse to AFP. “We are being asked to do everything, including replacing ambulances. At some point we're just not going to be able to do it anymore.”

He added that on top of those working constraints, the state is trying to push forward the retirement age which normally begins at 57.

Pierre Tenepoude, who has been a firefighter for 10 years in the city of Nimes, told AFP that they feel like they're working at 200 percent without respect or the means to do their jobs properly.

“There is a real anger and the problem is we're not being listened to,” said 46-year old Eric Brezault speaking to Reuters.

Government response
In response to their grievances, Laurent Nuñez, the secretary of state to Ministry of Interior said the problems expressed by the firefighters were being taken seriously by the government.

He announced an experimental project of 'unique number' for emergencies, 112, which would make it easier to direct calls.

Professional firefighters makeup about 16 percent of the 247,000 firefighters in France. The rest are volunteers.

the problems of the firefighters were taken "arms-in-the-body" by the government and announced the experimentation of a "number unique" urgency - the 112- which would make it possible to better direct the calls.