Brexit deal could still be reached this week, say negotiators 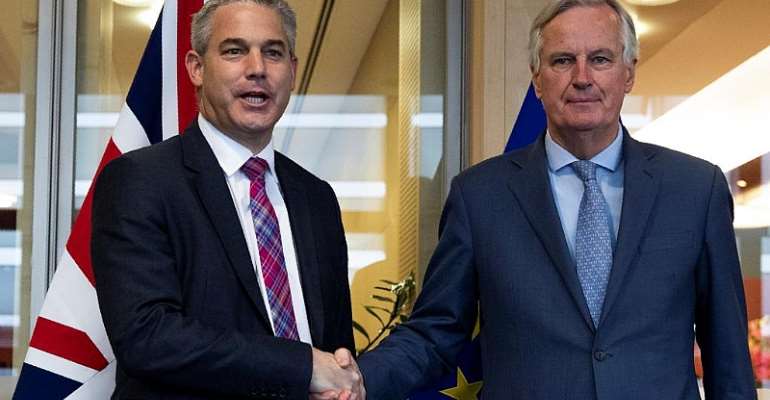 British and EU negotiators voiced cautious optimism this Tuesday that an outline agreement for a Brexit deal could be reached this week, just two days ahead of a key European summit. But both sides have admitted time is tight.

British and EU officials are scrambling to draft a deal on Britain's exit terms before a summit of EU leaders gets underway in Brussels this Thursday, as UK Prime Minister Boris Johnson seeks to fulfil his vow to take Britain out on October 31.

Chief EU negotiator Michel Barnier struck a cautiously upbeat note as he arrived in Luxembourg on Tuesday to brief the other 27 EU members on the status of the closed-door talks.

"This work has been intense all along the weekend and yesterday because even if the agreement will be difficult, more and more difficult to be frank, it's still possible this week," Barnier told reporters.

"Let me add also that it is high time to turn good intentions into legal text."

"We need to give them space to proceed but detailed conversations are under way and a deal is still very possible."

More than three years after Britain's 2016 referendum vote to leave, the sticking point remains how to avoid customs checks on the border between British-ruled Northern Ireland and EU-member, the Republic of Ireland.

The European Union has reservations about London's proposed customs arrangements and the role for Northern Ireland's devolved assembly in giving consent to the plans.

European concerns over unfair competition
European ministers arriving to hear from Barnier insisted Britain still had to give more ground on its customs plans to protect the integrity of the EU single market from potential smuggling.

"For the Netherlands it is extremely important that there is no unfair competition from outside the EU using the Irish-Northern Irish border," Dutch Foreign Minister Stek Blok said.

"The UK proposal contained some steps forward, but not enough that the internal market will be protected."

German Chancellor Angela Merkel outlined why EU officials are driving a hard bargain and hoping Britain will commit to a "level playing field" in post-Brexit trade and commerce.

"One thing is clear, Britain will develop into another competitor on the doorstep of Europe," she told industrialists. "And therefore the EU will be challenged to become more competitive and to assume geopolitical responsibility."

The two-day EU summit is crucial because, under the Benn Act, Johnson must get a new deal approved by MPs by Saturday if he is to avoid asking for a delay.

A showdown is anticipated in this emergency sitting of the UK Parliament - the first in 37 years.