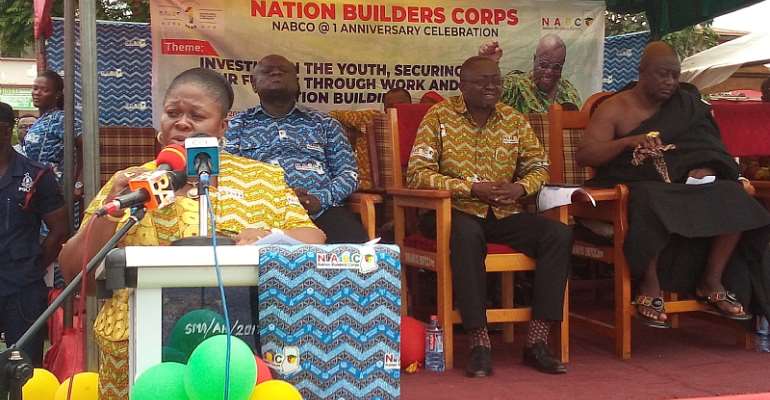 The Bono Regional Minister, Evelyn Ama Kumi-Richardson, has called for a comprehensive review of the Nation Builders Corps (NaBCo) to find solutions to the implementation challenges.

“As we celebrate the one year anniversary of the programme, I expect that a thorough review of the programme and modules would be undertaken to know if the benchmarks are being met and if there are some shortcomings, they will be appropriately addressed."

The Minister said this in Sunyani during the durbar to climax activities marking the first anniversary of the introduction of the programme in the region.

She explained that this “will justify the government’s expenditure for the programme and also enable the programme stand the test of time.”

Mrs. Kumi-Richardson stated that it is an undeniable fact that resident Akufo-Addo is overwhelmingly obsessed with securing the future of our youth and is leaving no stone unturned to see that dream achieved.

“This informed his decision to introduce the Nation Builders Corps. The intervention, though, not a panacea to the ills of the upsurge of unemployment in the country, it serves as a stop-gap for our youth to prepare adequately to step into the world of employment and work.

“Nation building is a collective enterprise. No one person or a group of persons can do it on their own. It is all about leveraging our skills, knowledge and resources so that we can ensure that young people will have the skills to put the development agenda of this country forward,” she stressed.

The Regional Minister described the contributions of NABCO trainees to public services in the region as “immeasurable” as they have filled the staffing gap that existed in most departments and agencies and urged the beneficiaries of the programme to remain steadfast and work hard to contribute to the advancement of society while acquiring experiences in their various fields of work.

The Regional NABCO Coordinator, Kofi Boateng, said a total of 8,645 NABCO trainees were posted to the then Brong Ahafo region last year to serve in all the seven modules of the programme in all the 29 municipalities and districts.

Going through some economics and the investments made by government in the programme, Mr. Kofi Boateng observed that over the last one year of the implementation of the NABCO each trainee who has been receiving his or her monthly stipend of Gh.c 700.00 had in the period pocketed Gh.c 8,400.00.

This translates into Gh.c 72,618,000.00 for all the 8,645 NABCO trainees serving in various parts of the Bono, Bono East and the Ahafo regions in the last year.

The amount, he noted, could have gone into the construction of roads, schools, health facilities and other infrastructural projects but government found it equally expedient to invest this amount in the thousands of the unemployed youth to enable them fend for themselves and lead decent lives.

Nana Bofotia Boamponsem II, the Krontihene of Sunyani, who presided over the occasion, called on the government to increase the monthly stipends for the trainees from the current figure of Gh.c 700.00 per head to Gh.c 1,000.00.

The Tanokrom Agromma from the Centre for National Culture in Sunyani were in their elements during the programme and kept their audience spell-bound as they treated them to a variety of cultural displays.

Ahead of the durbar, beneficiaries of the programme organized a float through some principal streets of Sunyani, undertook a health screening exercise, engaged in a football competition and made a donation.