The Nonsense Discrimination Against Hijabi Must Stop Now And Now 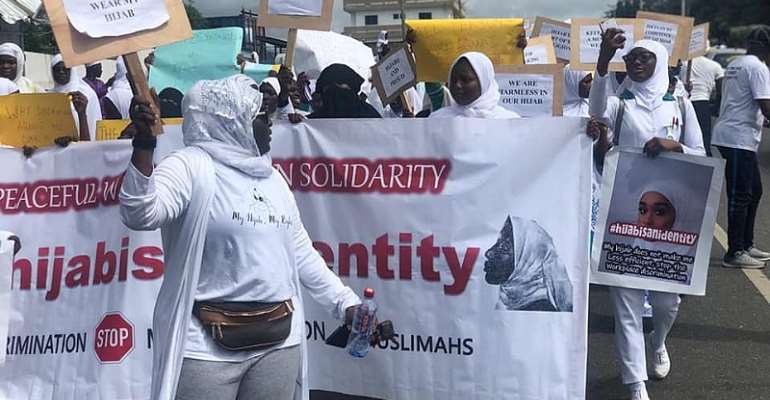 Ghana being a secular state guarantees freedom of religion for its citizens. Practicing the doctrines and dictates of any known and recognised religion in Ghana is legal. Unfortunately, Islam and practicing Muslim ladies in an effort to look modest and decent in their dressing as Islam dictates, have come under unwanted persecution.

This unconstitutional attack and impunity is an attack not only to those victims who suffer this harassment but also an attack to the National Chief Imaam, The Vice President of the nation, The Second Lady of the nation and all Muslim women across the world.

Some cowards hiding behind 'power and authority' in some institutions who for their shameful reasons can not come out open and public but hide to give unnecessary directives for Muslim students and workers in certain institutions to disrobe their hijaab must be dealt with rigorously according to the constitution of Ghana.

Disallowing people to practise their religion is as criminal as corruption and murder which are both detested by the state.

The constitution of Ghana is explicit and categoric in this regard. It states without any equivocation or ambiguity under chapter 5 (2) of the Constitution, Fundamental Human Rights and Freedom, that *Every person in Ghana, whatever his race, place of origin, political opinion, colour, religion, creed or gender shall be entitled to the fundamental human rights and freedoms of the individual contained in this Chapter but subject to respect for the rights and freedoms of others and for the public interest.*

In recent times, this particular article quoted above has been defied by some 'authorities' in certain institutions. This means the law has been broken and no punitive measure has been meted out to these law breakers of those institutions. Are we going to allow law breakers get away without any punishment? The law must work and must not be selectively applied because of the positions certain persons occupy.

Wearing hijaab to school and workplace is Legal in Ghana. How at all does hijaab affect one in class or at the workplace that one is directed to take it off? How?

In 2015, the government issued a stern warning to schools and state authorities to desist disallowing Muslims from putting on the hijaab because hijaab is a right enshrined in the Constitution.

Therefore Any Muslim who suffers such harassment should report that to the appropriate authorities or National GMSA on 0267716616 or 0244872975 to deal with it right away.

Your right is your right and no one can take it away from you.

Hijaab is your right.
Wear it and feel proud.
How more beautiful you look in hijaab.
Yaasir Arafat
University Of Ghana, Accra City Campus.
0570066188