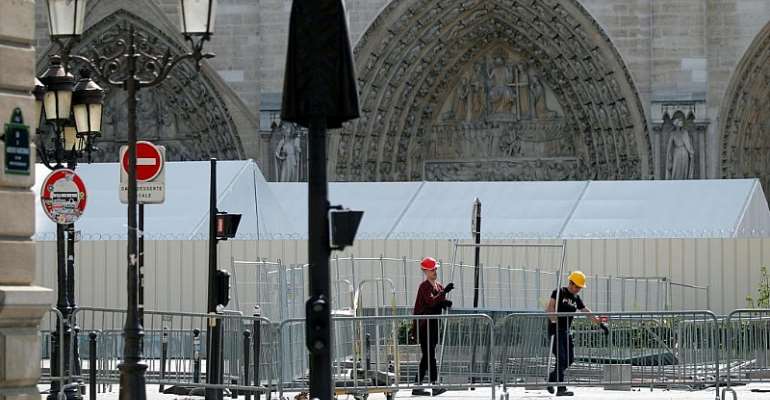 The chief architect of Notre-Dame says the state would save considerable time if the restoration of the cathedral was based on the original model, rather than a modern rendition. This comes as Paris marks six months to the day since a fire destroyed the structure's gothic roof and spire.

Philippe Villeneuve's job will be to present a restoration plan to the government, which takes into consideration all the various technical and cultural points.

Back in June, he had already expressed his desire to see an identical restoration, underlining the great "strength" of Viollet-le-Duc's spire, which fitted in perfectly with the medieval design, because it was "timeless".

In this way, he set himself apart from President Emmanuel Macron, who said he was open to a contemporary design for the restoration.

Once the pollution has been cleaned up and the arches rebuilt, Villeneuve hopes to open the cathedral to the public quickly, but he admits much work will remain.

"Nothing is stopping us from completing the rest of the works later on."

This point of view is also shared by the reverend of Notre-Dame, Patrick Chauvet, said it was important to complete the initial safety works quickly, in order to allow public access to the main square in front of the cathedral.

Desire to re-open to the public
He reiterated the wish of the Church diocese to install a temporary tent with a Virgin statue inside on the Church square, as a place for prayer, to satisy worhshippers and tourists alike.

"We mustn't rush the process, we don't want to make mistakes, but we shouldn't delay much longer either if we want to have a cathedral standing in one piece," he said at a press conference on Tuesday.

He said it was urgent to remove the scaffolding which was installed at the time of the fire and warned that it would only take one big storm to create further damage.

Donations trickling in
Since the fire, some 922 millions of euros worth of donations have been pledged to rebuild the cathedral.

"104 million euros have already been paid by donors who number 350,000," the French Minister for Culture, Franck Riester told the press conference in Paris on Tuesday.

"It's too soon to say whether this sum will be enough. The state will take on its responsibilities, we will not let Notre-Dame down," he stressed.

Several historical and heritage foundations have been tasked by the government with collecting and managing the donations.

A drawing competition for children has been launched until 1st March, to design "the Notre-Dame they know, or the one they imagine."