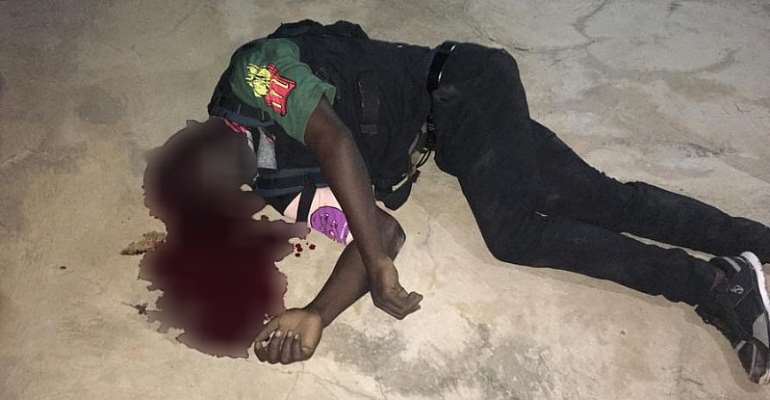 Luck eluded a 30-year-old suspected armed robber when he was gunned down by a prisons officer during a robbery operation in a house at Oyarifa, near Adenta in Accra.

The deceased, yet to be named, was one of two others who attacked occupants of a house at Oyarifa Rehoboth area yesterday dawn.

The rest of his colleagues fled with the items robbed when they realized that their colleague had been shot.

The prison officer, named withheld, shot and killed the suspected armed robber and later called on the Abokobi Ayi Mensah police for assistance.

According to residents of the area, around 1am yesterday, October 11, 2019 three suspected armed robbers wearing masks attacked an apartment being occupied by the Prisons officer and his family.

Residents claim the suspects armed with a pistol, a hammer and cutter broke into the house and at gunpoint robbed the occupants of their mobile phones and an unspecified amount of money.

“While they were about to escape, the Prisons officer, who also has an AK47 rifle in the house, reached out for the gun and shot at one of the armed robbers killing him instantly.

Inspector Kwabena Danso of the Accra Regional Public Relations Office, when contacted confirmed that the Abokobi Ayi Mensah patrol team was called to the scene and on arrival at the house; they saw a male adult of about 30 years lying dead in a pool of blood.

He said the deceased had gunshot wound in the head and was wearing a black facial mask covering his face lying on the compound of the house.

“Photograph of the body was taken before the body was conveyed to the police hospital morgue for preservation.”

Inspector Danso noted that the Prisons officer has been invited by the Abokobi Police Command to assist the police with their investigations.

“The hammer and industrial cutter said to have belonged to the suspected armed robbers were also taken from the scene of crime to the police station.”