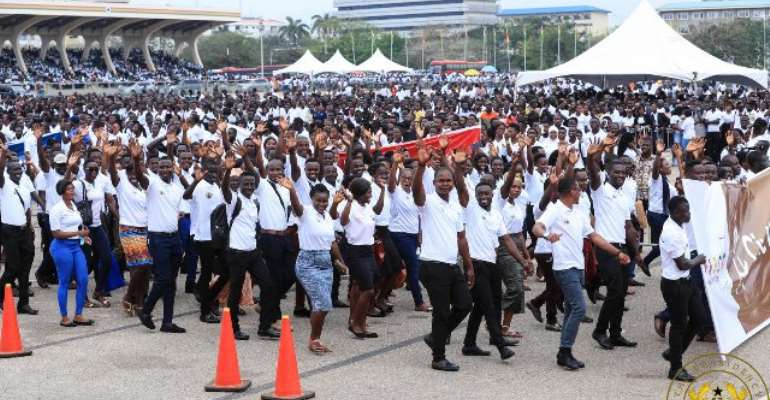 The Nation Builders Corps (NABCo) has announced plans to introduce a clock-in and clock-out system to help monitor and sanction beneficiaries who absent themselves from duties.

Baba Mohammed, the Greater Accra Regional Coordinator of NABCo, who announced this at a media briefing in Accra on Thursday, to outline activities earmarked for its one-year anniversary, said the consultant that developed the application was conducting a test-run and would soon be operationalised.

Giving a rundown of the successes chalked by NABCo since its inception a year ago, Hajj Mohammed said the Greater Accra region received a total of 31,809 trainees, representing 21.12 per cent of the total national NABCo workforce deployed across the country.

They were deployed under modules such as Educate Ghana, Health Ghana, Feed Ghana, Digitise Ghana and Revenue Ghana, to assist both public and public sector institutions to implement some national initiatives, including; the digital addressing system, national identification scheme, revenue collection and improve healthcare delivery.

Mr Baba Mohammed said report from some partner organisations was positive and revealed that some NABCo trainees were performing beyond expectations and that some organisations were considering plans to recruit them on permanent basis.

The Regional NABCo Coordinator discounted assertions that NABCo was not paying monthly allowances of some trainees, explaining that, some beneficiaries failed to provide relevant information for monthly validation despite sending monthly text messages to remind them, hence the occasional reports of delays in allowance payment.

He explained that those who provided monthly updates of their engagements through the online validation portal did not encounter challenges with their monthly stipends.

Responding to beneficiaries still receiving allowances despite leaving NABCo employment, he said nothing of that sort existed in the programme because NABCo District Supervisors and Coordinators were in constant touch with trainees on the field regularly, to monitor their activities and absenteeism.

He, therefore, asked individuals and organisations that had evidence, on the contrary, to inform Management of NABCo, in order to save the taxpayers’ funds from going waste.

Some programme lined-up for the one-year celebration included Inter-Zonal Gala on Friday, October 11, health screening for residents of Agbogbloshie on Saturday, October 12 and a Regional Durbar at the Accra Metropolitan Assembly City Centre on Monday, October 14.

The creation of NABCo is intended to address graduate unemployment situation in the country, with each beneficiary entitled to receive GHc700 monthly allowance for the next three years.

Government would support beneficiaries that exit the programme after three years, with start-up tools and capital to start their own businesses.

About 100,000 graduates were recruited under the programme and duly commissioned on May 1, 2018, by President Nana Addo Dankwa Akufo-Addo at the Black Star Square in Accra.