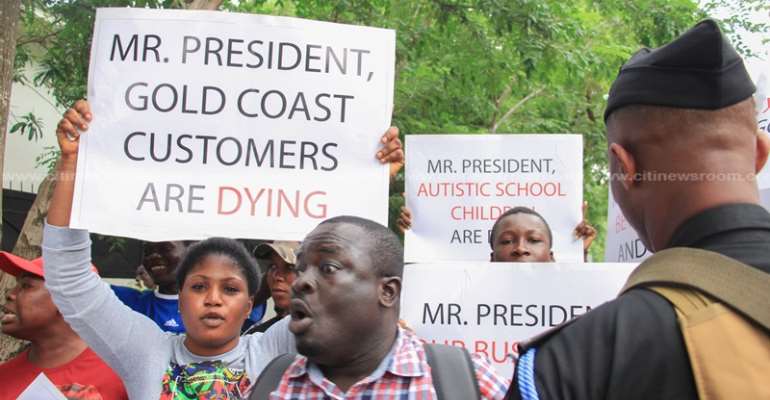 This is to pile pressure on the company’s management to payback their locked up investments.

This is just one of the many protests that have hit the company in recent times as many financial institutions go through turbulent times.

Gold Coast Security, a member of Groupe Nduom, has struggled just like defunct GN Bank, which was downgraded to a Savings and Loans before its licensed was finally withdrawn.

The demonstrators are expected to converge at Obra Spot.

Meanwhile, the Chairman of Groupe Nduom, Dr Papa Kwesi Nduom, has said Gold Coast Fund Management (GCFM), rebranded as BlackShield, will pay GHS 300 million worth of investments to its clients before 2020.

In an article titled: “Out of diversity, a golden key to the future can come” published by the businessman on Wednesday, 18 September 2019, Dr Nduom underscored the need to support firms to be stable and profitable.

“Like Goldman Sachs, GCFM, now BlackShield, has suffered unprecedented demand and pressures for the redemption of investments. The regulator, the Securities & Exchange Commission (SEC) in January 2019 directed GCFM not to accept new funds or investments due to the liquidity challenges facing the company. A public notice followed. Customers were encouraged publicly to file official complaints or go to court to demand their investments. Through all of this, over GHS200million of investments have been returned to investors. GHS300 million more will be returned by the end of 2019,” he said.