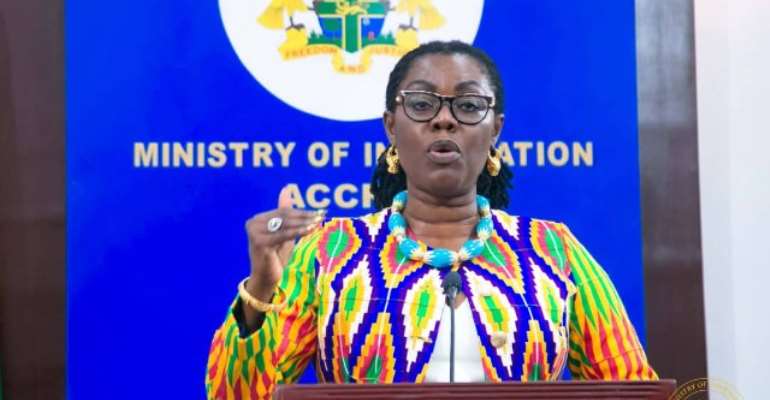 The Communications Minister Ursula Owusu Ekuful has warned that Mobile Network Operators that fail to roll over unused data and voice bundles purchased by subscribers upon expiration would risk forfeiting their licences.

She entreated telcos that do not agree with the Ministry’s policy directive to go to court for redress rather than rob consumers by passing on the full Communication Service Tax (CST) to them, while retaining the unused data and voice bundles.

She said the CST would provide revenues to implement cybersecurity initiatives and protect the national digital infrastructure in the public and the private sector respectively.

This comes on the back of the increase of the Communication Service Tax (CST) from 6 per cent to 9 per cent on September 4, 2019, with telcos passing on the full tax to their consumers.

Addressing the media in Accra on Monday to re-affirm the directive, Mrs Owusu Ekuful said the CST should be treated the same way the Value Added Tax (VAT), National Health Insurance Levy (NHIL), Ghana Education Trust Fund (GETFund) levy and all other taxes and levies imposed on entities doing business in Ghana.

She said Ghana is expected to accrue US$100 million in revenues in the first year and US$250 million in the next five years for the implementation of Communication Service Tax (CST).

The Minister said the CST had been in existence since 2008 to September 30, 2019, with the MNOs absorbing the six per cent tax, as far as the subscribers' experience was concerned.

Therefore, it came as a big surprise that, the MNOs suddenly decided to stop the practice when nothing has changed, except the three percent increase in the rate from six to nine, as announced by the Finance Minister in the July Budget Review, she said.

“This unusual practice which flew in the face of industry experience and we were informed by MNOs that, they took advantage of the three per cent increase to pass on the entire tax to subscribers.

“This has effectively increased their profit margins at the expense of subscribers, when there has been no other change in their operational environment. Whatever they may have lost in absorbing the six per cent CST, they more than made up for it by refusing to roll over credit that had been paid for by consumers, but remained unused on the expiration of the bundle period,” Mrs Owusu Ekuful explained.

The Communication Ministry, she said, would continue to implement policies through its agencies and provide adequate regulatory oversight in the communication sector to ensure that the expectations of stakeholders are met within the confines of the law.

The Minister said the government of Nana Akufo-Addo was determined to use information communication technology to deliver efficient, effective and improved services to the citizens, therefore the ongoing digitisation efforts are geared towards formalizing the Ghanaian economy and the Ghana Beyond Aid agenda.

On October 11, 2019, the Communications Minister directed all Mobile Network Operators to ensure that unused data must be rolled over to the next data purchased by subscribers.

The move is to minimise the negative impact of the current mode of deduction of the CST by the Telecommunication Companies.

The letter was copied to the Chief Executive Officers (CEOs) of MTN and Vodafone as well as the two Deputy Ministers of Communication, Mr George Nenyi Andah and Mr Vincent Sowah-Odotei.

Ghana, Liberia set up joint committee to look into Buduburam...
8 minutes ago