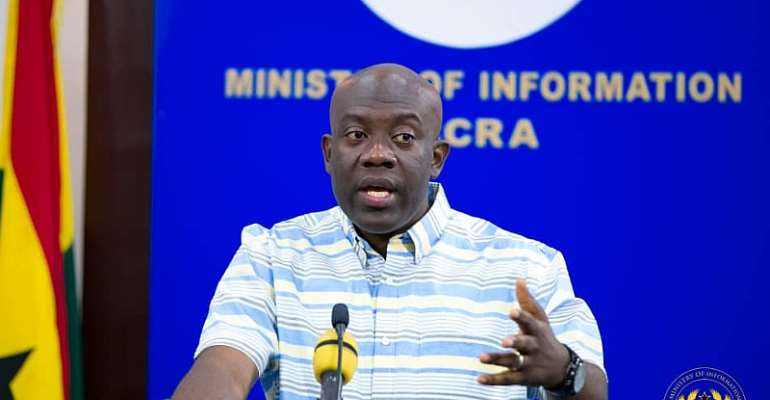 The Minister for Information, Kojo Oppong Nkrumah has disclosed that President Akufo-Addo’s 8-day tour in three Regions of the country was to interact with the citizenry and have first hand information on happening on the grounds.

According to him, the 8-day tour saw President Akufo-Addo making 42 stops, inspecting and interacting with Ghanaians.

Addressing the media at a press briefing in Accra, the Information Minister said “The President’s tour in the Bono, Ashanti and Eastern Regions afforded him an opportunity to witness at first-hand the progress of work in these regions on his administration’s flagship programs”

He also added that the tour also afforded him an opportunity to hear directly from citizens, interest groups and traditional rulers who gave him valuable insights into what they make of his administration’s delivery so far.

The Information Minister further highlighted that education, infrastructure and agriculture were the three key issues that engaged the President’s attention on his tour.

On education, he added that the President was impressed with the delivery of the Free SHS program and was particularly happy to see all three streams (forms 1,2,3) benefit from the program.

He also noted that the President was highly expectant that excellent results from the first batch of beneficiaries in June 2020 will put the critics of the program to shame.

"He was happy to see the progress work on dormitories and classroom blocks which are aimed at ending the double-track system once fully completed,” the sector minister disclosed.

Planting for Food and Jobs

Kojo Oppong Nkrumah disclosed that areas visited gave positive feedback adding that some requests were made for government’s intervention to cover other crops like cashew.

“The President is committed to ensuring that his team in Parliament pushes for the passage of the Tree Crops Bill when Parliament resumes in October to allow the necessary institutional support for Cashew and other tree crops to be fully rolled out,” he mentioned

He emphasized that Cabinet has already given policy approval for the passage of this bill.

Hon Oppong Nkrumah stated that the President had the opportunity to interact with Ministers, Consultants and contractors working on key projects such as roads, Youth Development centers, Airport among other places.

He further stressed that President Akufo-Addo admonished those behind schedule to get on track while urging his ministers to ensure those owed are promptly paid.

“The Finance Ministry has in response outlined how it plans to make over 1 billion cedis in payment available with immediate effect in fulfillment of its commitments,” he emphasised.

The Information Ministry says although the President has returned to Accra, plans on tour for the final two regions, Volta and Greater Accra will be announced in due course.