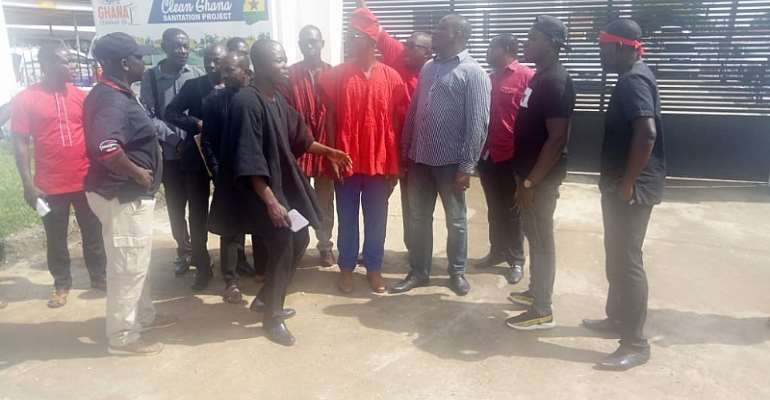 Aggrieved contractors who were allegedly duped by Mr Frank Akulley, the CEO of Ghana First Company Limited (GFCL) have burst out their frustrations.

According to them, on the 7th of May 2018, Graphics online published an article titled: "Boost for sanitation efforts", Ghana First Company to build 20,000 modern toilet facilities across the country.

This led to the signing of a Memorandum of Understanding (MoU) with a German firm, Thermodul Systems GmBH with an amount of three hundred thousand dollars.

On the 24th April 2018 between Mr Frank Akulley and the managing directors of Thermodul Systems GmBH Lidia Mathe went into a Public Private Partnership (PPP) with the Metropolitan, Municipals and the District Assemblies (MMDAs) to construct these facilities throughout the country under a program dubbed, "Clean Ghana Project" aimed at eradicating open defecation in the country.

MMDAs through a letter with ref#SCR/FC101/412/6 dated 9th August 2017 and signed by Hon O.B Amoah the deputy Minister for Local Government and Rural Development, the contractors were given the contract. The agreement was to use their own resources to complete about sixty percent of the project before they can be paid through the First Ghana Company Limited.

They said, after completing 60percent of the project with some doing far above the 60percent mark, every contractor were forced to pay Ghc1,000 to Mr Frank Akulley before the MMDCEs will visit their site to give approval to those they deemed have reached the 60percent minimum threshold.

The unfortunate event, according to them, made payment of their 60percent become a tug of war with Ghana First Company Limited whose mother company it claims is the main financier of the project cannot be found.

The irate contractors said meanwhile some existing deplorable toilet facilities, which served the communities, were demolished to pave way for the 3 months ultra-modern project which have been constructed in some parts of the country.

However due to the non- payment of the contractors, the projects have stalled for months creating serious health concerns as the affected residents resort to open defecation.

“We want to make it clear to the public that the lands in which we have constructed the project belong to the government, and it is the same site that government has started using under his project of One -District-One Factory therefore the government should wake up on our issue,” they fumed.

They therefore threatened to embark on a massive demonstration in the next 7 days if nothing is being done about it.

“We are therefore challenging Ghana First Company Limited that, if they are “Genuine’ as they claim and they have the money, then we are giving them seven (7) days ultimatum from the day of publishing this paper to honor its payment certificates as a responsible company. Or else we will be left with no other option than to mount serious demonstrations, so that, the whole world would know about all these scandalous activities carried out by GFCL under this government,” they intimated.