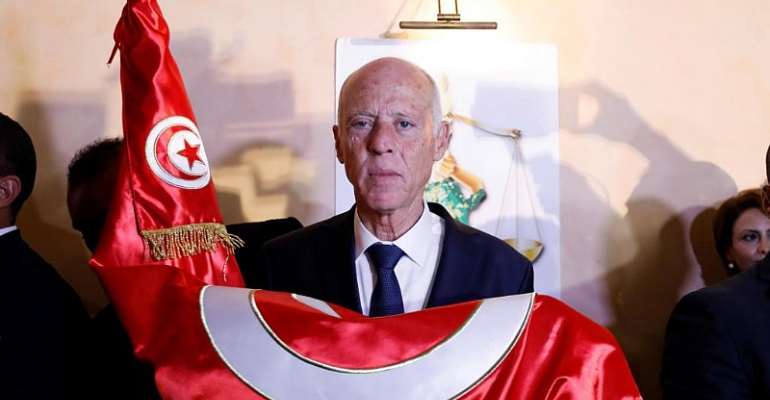 Kais Saied has officially won the presidency in Tunisia by a landslide of 72.71 percent of votes, the electoral commission has announced, effectively beating out business tycoon Nabil Karoui in Sunday's runoff.

The tight race was between conservative political outsider Kais Saied, a law professor who campaigned without any political party against Nabil Karoui, a media mogul who had spent the better part of this electoral campaign behind bars on alleged charges of corruption and money laundering.

Karoui was released from jail following a court order last week, with support from his rival Saied, but that appeared to have done little for votes.

Electoral promises
61 year-old Saied, often referred to as 'Robocop' for his monotone voice and droning speeches, campaigned on the values of the 2011 revolution: stark opposition to westernized and corrupt elites and in favour of a radical decentralization of the current government.

He won favour during his campaign by taking public transport, travelling to often-ignored areas across the country, such as the interior towns of Kasserine or Sidi Bouzid – far from the affluent north.

55-year-old Karoui was the only candidate to hold the majority of his electoral campaign from prison, under the banner of his party Qalb Tounes: the Heart of Tunisia.

He had used his media station, Nassma TV, to highlight work he had done through his charity Khalil Tounis, named after his son who was killed.

But many of his opponents say he had violated electoral rules by using his station as a campaign tool.

At the start of the campaign, he had promised a revolution at the ballot box in favour of the other Tunisia: the millions neglected by the establishment.

He campaigned on the need to strengthen the central government to allow the state to restore the economy and deliver goods and services to the people.

Turn-out
The electoral commission ISIE has said that turnout was at 55 percent, slightly lower than the intial figure of 58 announced just after the runoff on Sunday.

The figure, however, is higher than turnout during the first round of elections held on September 15.

Around 90 percent of young people, aged between 19 to 25 voted for Saied in this second round, according to estimates by the Sigma polling institute, compared with 49.2 of voters over 60.

Path to democracy
All eyes were watching the small but influential North African country as it went to the polls for the first round in September for its second presidential elections since its revolution in 2011.

It's uprising kick-started the Arab Spring around the region as Tunisians ousted an autocratic regime.

This latest round of voting was proof that the country, despite a lagging economy and high unemployment, stuck to its path towards democracy.

“If we are to hold real transparent elections, it is that we should not be able to expect the results in advance,” says Salwa Gantri, the head of the Tunisia office for the Internationl Centre for Transititional Justice.

And the voting from the first round to the run-off were anything but predictable.

“You don't see these elections in all the countries [involved in Arab Spring uprisings],” notes Gantri. “This is already a very precious point that Tunisians should work hard to preserve and strengthen it.”