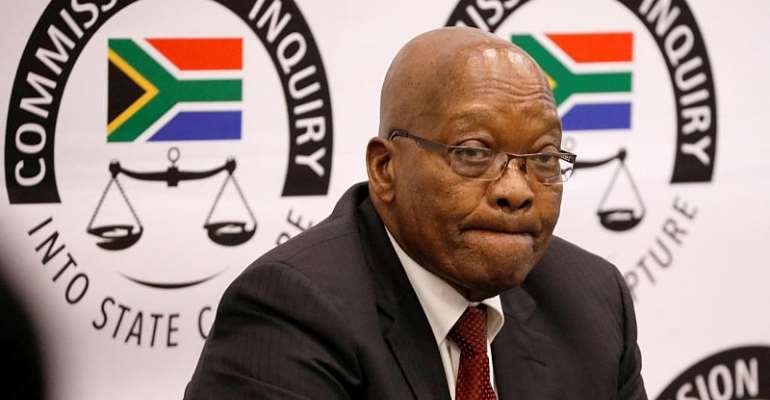 The birds confronting the former South African president look more like the grim and ravenous lapped-faced vultures often seen waiting to swoop onto the kills in South African game reserves.

Zuma is due in the Pietermartizburg High Court on Tuesday.

There he faces charges of corruption, racketeering and money laundering relating to deals he made during South Africa's 1999 two-billion-euro arms procurement.

Zuma's bid to have these charges permanently dropped on grounds that they are politically motivated was finally rejected by the Pietermaritzburg court on Friday.

It was his former counsel Kemp J Kemp who described Zuma's years of legal obfuscation and delay as the Stalingrad option, saying they would fight in every room, in every house and on every street to prevent the prosecution.

That strategy has failed and left Zuma being faced with astronomical legal bills.

The prosecution admits it does not know what to expect tomorrow.

The case has been put down for four days. Zuma might well have yet another delaying mechanism up his sleeve.

Nevertheless they are ready to produce their facts.

They will draw heavily on the successful prosecution 14 years ago of Zuma's financial advisor Schabir Schaik.

Supporters rally behind Zuma
The judge in in that trial, Hillary Squires declared Schaik and Zuma to have had a generally corrupt relationship.

The mass rallies that have been held outside court every time Zuma appeared in the past 18 months seeking to overturn the prosecution are become smaller.

His supporters loved hearing Zuma speak of being the son of warriors and vow that the knowledge he has procured as the ANC intelligence head has given him more than enough ammunition to fend off any legal challenge.

They are less enthusiastic about recent complaints by Zuma that he is being picked on by the establishment for championing the cause of the poor.

If the case does run for its full four days, judgment could be delayed until next year.

If found guilty, the seriousness of the charges could see him face as much as 15 years in jail.

Pietermartizburg trial is only a step along the legal minefield confronting Zuma.

He is scheduled once again to testify before the state capture commission from October 21 to 25.

Earlier this year he was treated with kid gloves by the commission chair, Deputy Chief Justice Raymond Zondo.

This enabled him simply to deny knowledge of events, stretching credibility beyond breaking point.

He is unlikely to enjoy a repeat of such favorable treatment.

Should he exercise his right to walk out it will provide ammunition to those seeking to prosecute him for activities during his terms as President - particularly with the wealthy Indian Gupta family who are at the very heart of establishing the state capture commission.

Zuma is also contesting the Pretoria High Court ruling that he pay back the million euros in court costs entailed in financing the so-called Stalingrad option from the public purse while he was in office.