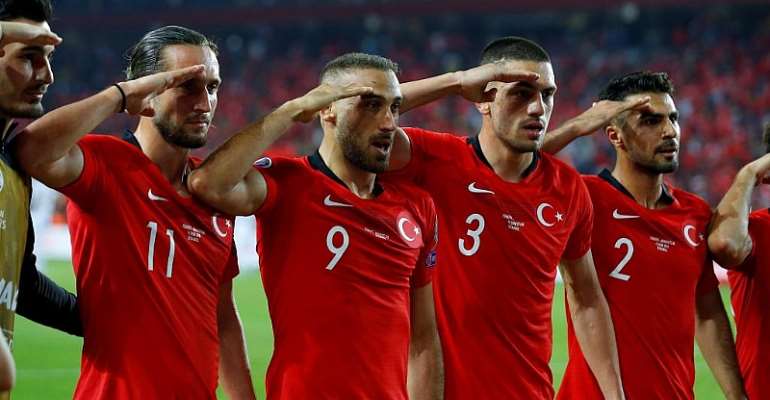 France's foreign minister has cancelled plans to attend the French national football team's Euro 2020 qualifying match against Turkey on Monday as tensions over Ankara's military offensive against Kurds spilled over into sports.

Foreign Minister Jean-Yves Le Drian's office confirmed the minister would decline to attend the match as tension continue to grow over the offensive against the Kurdish forces, who are considered terrorists in Ankara and key allies in a US-led coalition fighting the Islamic State (IS) armed group.

France said Saturday it was suspending arms sales to Turkey over an offensive it said compromised efforts against the IS, and several thousand people rallied in Paris and in other European cities in support of the Syrian Kurds at the week-end.

Some members of the French political establishment called for the match itself to be cancelled in response to Turkish players giving a salute after clinching a win against Albania in the Euro qualifier on Friday.

“With this military salute, the Turkish football team crossed the line that separates sports and politics,” tweeted Jean-Christophe Lagarde, leader of the centre-right UDI party and head of a parliamentary group dealing with Kurdish issues.

“It is not decent for us to open the Stade de France to those who salute the massacre of our Kurdish allies,” Lagarde wrote, concluding with the hashtag “#AnnulationMatchFranceTurquie”, a call to cancel this match that was trending on Twitter in France on Monday.

French politicians object to Turkish salute
Voices across the political spectrum also reacted to the salute, an image of which was also posted on the Turkish Football Federation official site.

“[Turkish President Recep Tayyip] Erdogan sends his army against the Kurds, without whom the Islamic State would still control the region today, and we're going to accept a football match allows the expression of support for this assassin?” tweeted Martine Billard of the France Unbowed party.

Others objected to French Football Federation President Noël Le Graët's remarks that “music will be very loud to cover the whistling”, especially during the French anthem, La Marseillaise. Some Turkish supporters whistled over the French anthem at the previous France-Turkey match in Konya, which ended in a 2-0 win for Turkey.

“Football must not serve the propaganda of Erdogan,” tweeted Jordan Bardella, European MP with the far-right National Rally. “It's unthinkable that the Turkish players could give the military salute on our soil, or that the Marseillaise could be booed again this evening.”

European football's governing body UEFA, which is organising the Euro 2020 tournament, said it would examine whether the salute contravened its ban on political references on the pitch.

Coaches seek to minimise politics
Coaches for both national teams called for politics to be kept out of the match at the Stade de France stadium in the northern Paris suburbs.

“There are geopolitical problems, but in regards to whether they'll have any consequence on the atmosphere of the match, we're not going to think about it,” said France coach Didier Deschamps.

“We're in the realm of sport: it's a football match in a football stadium. We're going to concentrate on that.”

French police and stadium staff both announced they would reinforce security at Monday's match, which is expected to draw 78,000 people, including at least 3,800 Turkish supporters.

“Sometimes there are provocations in the stands, but I want to address the Turkish supporters: if they come to see a match, it's to enjoy watching football,” said Turkey coach Senon Gunes. “I want them to applaud both teams, France as well.”

Gunes also sought to strike the right note in the team's position on the offensive.

“Terrorism from abroad has caused a lot of security problems in Turkey. I don't want to make any political declarations,” he said.

“We don't want war, and I wouldn't want this discussion to take over the match. Of course we encourage our soldiers who are out there, but I am against any kind of violence. It's human nature.”