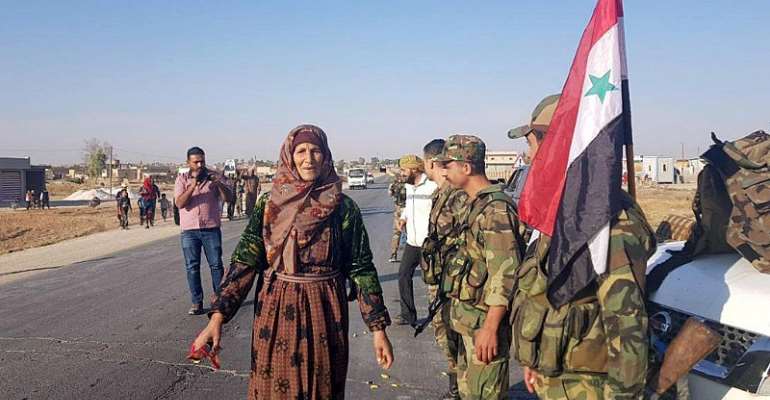 France says it will take measures that will ensure the security of its military and civilian personnel on the ground in north-east Syria, the Elysée announced late Sunday. The announcement comes as the escalation of the Turkish operation against the Kurds in the region rages on leaving forces from the international coalition vulnerable after US forces withdrew last week.

For security reasons, Paris cannot give more details as to what these measures will entail.

France has been one of the major contributors to the international coalition that has been working with the Syrian Democratic Forces, the SDF, alongside its Kurdish militias, to root out the Islamic State armed group (IS).

Aftermath of Washington's decision
Following US President Donald Trump's decision last week to pull out all American forces from northern Syria, Turkey almost immediately announced its 'Operation Peace Spring' aimed at rooting all Kurdish terrorists that it says has a direct link to the Kurdish terrorist groups in Turkey.

Over the weekend, the head of the Pentagon, Mark Esper added that an additional 1000 American soldiers would also be leaving the north-Syrian region, further weakening coalition forces that find themselves in a precarious position between the Kurds and the Turks.

French policy
France never communicates details of where its Special Forces are stationed, but with the latest announcement from Washington, it was forced to acknowledge French forces on the ground in Syria.

“We never hid the fact that countries who have small contingents [on the ground] could not remain if the US ever withdrew,” stressed a French diplomatic source to AFP.

French forces played a strategic role in this coalition, mainly due to their airbase in nearby Jordan.

They were deployed largely to help out many of the Kurdish militias fight against IS.

According to a French government force, the Americans played a very important role in the coalition in terms of intelligence, targeting and air refuelling.

Without their help, coupled with the Turkish operation growing bigger each day, it is uncertain how the coalition will be able to maintain its initial victory against the demise of IS.

In an effort to strenghten its forces on the ground, the SDF has asked the Syrian army for help.