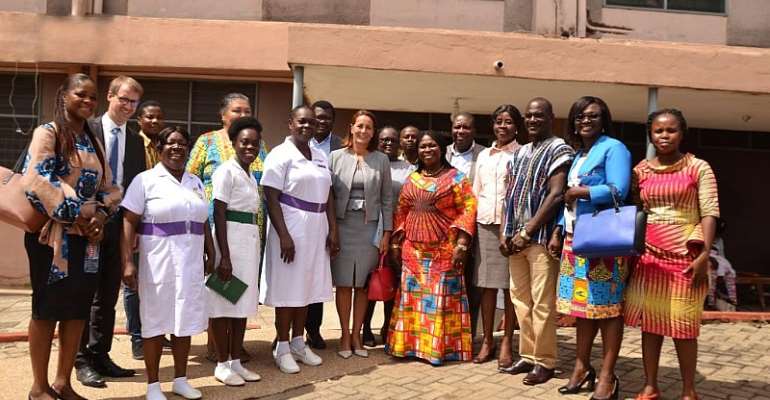 The French Ambassador, Anne Sophie AVE, went to the Maamobi General Hospital in Accra where she was welcomed by the Director, Dr. Dorcas ANFU OKINE and various care staff of the establishment as well as the CCM Chair, Ms. Cecilia SENOO.

She then met with members of the CCM as well as representatives of the Ministry of Health and the Ghana Health Service to discuss the modalities for strategic management and monitoring of grants.

The end of the morning was dedicated to a meeting with direct beneficiaries of the Global Fund. H.E. the Ambassador AVE was able to speak with Mrs. Comfort ASAMOAH-ADU, Executive Director of the WAPCAS (West African Program to Combat AIDS and STIs), the main recipient of the Global Fund. This sequence was an opportunity to discuss with different beneficiaries and affected communities about their backgrounds and the challenges they face.

The Global Fund has several objectives: maximizing the impact of actions against HIV / AIDS, tuberculosis and malaria; building resilient and sustainable health systems; promotion and protection of human rights and gender equality and the mobilization of resources.

Since 2002, when it was created, more than $ 40 billion has been allocated to 140 countries to fight these three pandemics. By 2018, programs supported by the Global Fund to Fight HIV, Tuberculosis and Malaria have saved 32 million lives worldwide.

Ghana, the first recipient of a Global Fund grant, has received cumulative disbursements of US $ 817 million since 2002, including about US $ 110 million from France.

Malaria remains a leading cause of death in Ghana, but since 2006 significant progress has been made in reducing prevalence, incidence and mortality. Tuberculosis is treated successfully in 85% of cases, but screening coverage is still low, as is the case for HIV. HIV / AIDS remains a significant cause of death and prevalence is high among key populations (sex workers, men who have sex with men). New HIV infections do not decrease (19,100 cases / year in 2017), the number of people living with HIV is estimated at 320,000 in 2018.

On October 10, 2019, France hosted the 6th Global Fund Replenishment Conference in Lyon, meeting the financial needs for the 2020-2022 periods with a financial target of $ 14 billion to help save $ 16 million lives and avoid 234 million new infections in 2030.

The States present at this Conference have met their commitments: the Fund has collected $ 14.02 billion in pledges, including $ 1.4 billion from France, which remains the second largest contributor to the Global Fund since its creation in 2002, after the United States.

Global Fund resources alone will not be sufficient and the Government of Ghana will undoubtedly need strengthen its efforts through increased health budgets to eradicate the 3 pandemics.