Mozambique leader campaigns on gas riches, but will poor benefit? 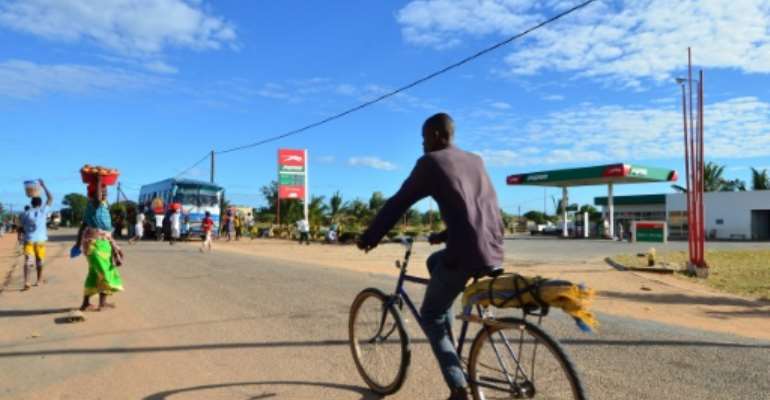 Mozambican President Filipe Nyusi says the huge discovery can transform a nation almost half of whose citizens curently live in poverty. By EMIDIO JOSINE (AFP/File)

The discovery of vast gas reserves on Mozambique's remote northern coast has the potential to transform the economy of one of the world's poorest countries and lift millions out of poverty.

That's the message President Filipe Nyusi has repeated at every opportunity as he campaigned ahead of the country's general election on Tuesday.

But since the underwater treasure was identified almost a decade ago, questions have been raised about whether the colossal riches will ultimately benefit the nearly half of the southeastern African country living in poverty.

The size of the discovery is staggering.

Some have already dubbed the country the "new Qatar".

But development at the sites in the northernmost province Cabo Delgado has been repeatedly delayed -- in part due to deadly attacks by a shadowy jihadist insurgency in the area -- and has only recently started to make headway.

Nyusi, seeking re-election this week, is pinning great hopes on the massive discovery which can turn Mozambique into one of the world's biggest exporters of liquefied natural gas. By GIANLUIGI GUERCIA (AFP/File)

Construction began in August on a $25 billion project that French energy giant Total acquired from US firm Anadarko as part of the latter company's takeover by Occidental.

And American gas giant Exxon Mobil is expected to finalise a $30 billion investment next year.

For the many or the few?

Nyusi's Frelimo party has been in power since the country gained independence in 1975, but its popularity has recently taken a hit due to a financial crisis linked to state corruption.

The president, running for a second term, has been keen to talk up the gas projects, estimated to create 5,000 direct jobs and 45,000 indirect jobs.

Of course, history is littered with examples of countries with huge energy wealth that enriches only those in power.

"Some countries have had natural resources for a long time, but a majority of their population stayed poor," Nyusi said last week.

He pledged that would not be the case in Mozambique: "We want and we have to make a difference."

Although the president has pledged that the resources flowing from the project will "make a difference" to the people, opposition supporters are less sure, citing entrenched corruption in the country. By - (AFP/File)

Nyusi said last month that the state would spend $880 million it expects to receive as part of the Occidental takeover on rebuilding areas devastated by cyclones Idai and Kenneth earlier this year, as well as paying off state debt and closing the budget deficit.

With 46 percent of the country's around 31 million population living below the poverty line, according to the World Bank, such huge sums raise the hopes of some voters.

"These resources will benefit everyone," said Sara Lucas, a 35-year-old mother at Nyusi's final campaign event in the capital Maputo on Saturday.

But this enthusiasm is not shared by everyone, with critics accusing the regime of entrenched corruption.

"As with everything else, these resources will only benefit the few," said Stelio Inacio, a 41-year-old official from the former rebel group turned main opposition party Renamo.

Even paying off state debt is contentious after it was revealed in 2016 that the government secretly borrowed $2 billion, plunging the country into the worst financial crisis in its history.

The "hidden debt" scandal uncovered a vast network of corruption with close links -- allegedly including family members -- to the regime.

"They said they would use the gas revenues to pay for the 'hidden debt'. We do not want that," said opposition MP Simon Macuiani.

"The revenues must first serve the economic development of the country."

The opposition is not alone in fearing the wealth may not trickle down.

"Our forecast is that the poorest of the poorest in Mozambique are not really going to benefit," said Liesl Louw-Vaudran, an analyst at South Africa's Institute for Security Studies.

"It is still crucial to have stability... Frelimo and Renamo have to stick to their political agreement if things are going to improve in Mozambique."

The country suffered a brutal 1975-1992 civil war that left almost a million dead, and political tensions remain -- this year's election campaign has been marred by violence. By GIANLUIGI GUERCIA (AFP/File)

The two arch-foes signed a peace deal in August hoping to turn the page on decades of conflict, including a brutal 1975-1992 civil war that left nearly a million dead.

But the campaign for Tuesday's elections has been marred by violence, sparking fears the vote could sorely test the fragile peace.

Lutero Simango, an MP of the country's third largest party MDM, said the gas resources could be "a curse or a promise of prosperity."

"If the poor population of the country does not benefit, it will create the conditions for a new cycle of violence."