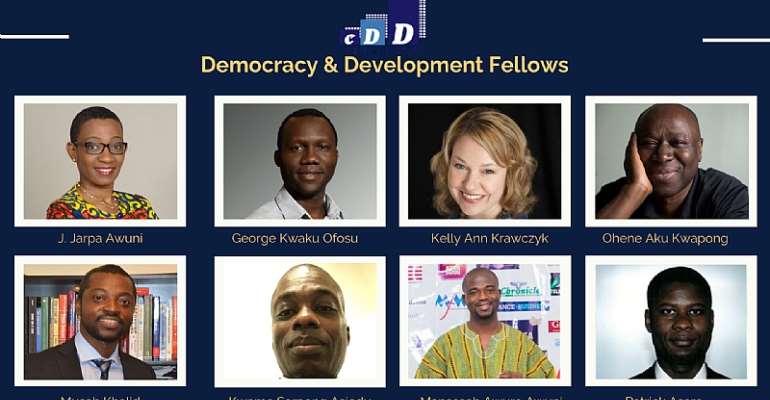 The Ghana Center for Democratic Development (CDD-Ghana) has selected a new batch of experts, practitioners, and scholars to join its Democracy and Development (D & D) Fellows Program.

Launched in July 2018, the D & D Fellows Program is designed to attract scholars, researchers, consultants, and practitioners whose current research or policy interest, specialty, and expertise overlap CDD-Ghana’s and who are interested in collaborating with the Center to influence policy processes and development outcomes through research, analysis, education, and advocacy.

The new D&D Fellows are: George K. Ofosu is an Assistant Professor of Political Science in the Department of Government at the London School of Economics. His research focuses on political representation and accountability, election integrity, legislator behavior, and the causes of democratic responsiveness, with a regional focus on Sub-Saharan Africa. He also works on issues of research design and transparency. Dr. Ofosu’s research has received funding from the National Science Foundation, the UK’s Department for International Development, the International Growth Center, and the Berkeley Initiative for Transparency in the Social Sciences. His work has been published or forthcoming in the American Political Science Review, American Journal of Political Science, British Journal of Political Science, Electoral Studies, and the Oxford Research Encyclopedia of Politics. Before joining the LSE, George held research fellowship positions at Washington University in St. Louis, Stanford’s Center on Democracy, Development, and the Rule of Law (2015-2016) and the Weatherhead Center for International Affairs, Harvard University (2009-2010). He was a research officer of the Ghana Center for Democratic Development (2007-2011) and has consulted for the National Democratic Institute on domestic election observation efforts and parallel vote tabulations in Malawi (2009), Nigeria (2011) and Guinea (2015). Dr. Ofosu received his Ph.D. in Political Science at the University of California, Los Angeles. He earned his BA (Hons.) in Philosophy and Religion at the University of Ghana.

Kelly Ann Krawczyk is an Associate Professor in the Department of Political Science at Auburn University. Her research focuses on African elections and civic engagement, as well as on West African civil society. Kelly earned her Ph.D. in Political Science, as well as a Master’s in Public Administration, from Wayne State University in Detroit, Michigan. Her work is situated in developing democracies in Anglophone West Africa, and explores the role and influence of civil society on democratic governance, including their impact on citizen participation and civic engagement. She also has extensive experience with West African elections, serving as in international observer in Ghana (2012), Liberia (2011 and 2017), and Nigeria (2019). She was a Visiting Scholar at the Liberian Governance Commission, where she collaborated on their 2016 Annual Governance Report: An Assessment of Liberia’s Electoral System, contributing to research design and survey questions for assessment and evaluation of the Liberia National Election Commission (NEC). Her research is published in journals such as Nonprofit & Voluntary Sector Quarterly and Voluntas: International Journal of Voluntary and Nonprofit Organizations. Dr. Krawczyk has also authored book chapters, as well as governmental and professional publications. She is a Founding Committee Member of the Strengthening Research on Civil Society in West Africa project, an initiative of the Association for Research on Nonprofit Organizations and Voluntary Action (ARNOVA), funded by the Ford Foundation.

J. Jarpa Dawuni is an Associate Professor of Political Science at Howard University, Washington D.C. She holds a Doctorate in Political Science from Georgia State University and is a qualified Barrister-at-Law before Ghana’s Superior Courts of Judicature. Her primary areas of research include judicial politics, women in the legal professions, gender and the law, and democratization and women’s civil society organizing. Her two recent books are International Courts and the African Woman Judge: Unveiled Narratives (Routledge, 2018) co-edited with Judge Akua Kuenyehia and Gender and the Judiciary in Africa: From Obscurity to Parity? (Routledge, 2016), co-edited with Gretchen Bauer. A 2018 Fulbright Specialist Scholar to Ghana, where she designed a Center for Research in African Union Law, Dr Dawuni was Visiting Scholar at Queen’s University Faculty of Law, Kingston, Ontario, Canada, in 2017 and Visiting Scholar at the University of Copenhagen Faculty of Law iCourts Center of Excellence for International Courts in 2015. She was the recipient of the Outstanding Assistant Professor Award at Howard University in 2018. Dr. Dawuni is the founder and Executive Director of the non-profit Institute for African Women in Law (IAWL), which works to enhance the capacity of women in the legal professions in Africa and the Diaspora. She is a Global Scholar at the Wilson Center Women in Public Service Project. She sits on board of the West Africa Research Association (WARA) and the African Research Academies for Women (ARA-W). In 2016, she received the President Obama White House Presidential Award for her service on the Board of ARA-W. Dr. Dawuni belongs to several professional bodies and is the past Co-Convener of the Gender and Judging Collaborative Research Network of the Law and Society Association, Co-Convener of the Women’s Caucus of the African Studies Association and currently the Co-Convener of the Women and Gender Studies Collective at Howard University. She sits on the editorial board of the Journal of International Politics and Development (JIPAD) and the Peter Lange Book Series on Studies in Law and Politics. Her research has appeared in journals such as Studies in Gender and Development in Africa, Journal of African Law, University of Baltimore Law Journal and Africa Today. Dr. Dawuni has presented her research internationally at professional conferences and has been invited to speak at several universities, conferences and expert group meetings.

Kwame Sarpong Asiedu is a pharmacist by profession, with 19 years of practice to his name, including lecturing in Ghana and the United Kingdom. He previously held various senior leadership roles at Alliance Boots, now Walgreens Boots Alliance, rising to the position of Head of Pharmacy Operations for East Anglia. Kwame is a member of the Royal Pharmaceutical Society of Great Britain, Institute of Pharmacy Management International, and The Pharmaceutical Society of Ghana. In the last five years, Kwame has been involved in public interest advocacy, focusing mainly on Ghana and the improvement of primary healthcare access. He has consistently championed the view that, notwithstanding existing human resource constraints in the health sector, Ghana could realize significantly better health care outcomes if it channeled its scarce public resources in the health sector largely toward primary health and early intervention strategies, as opposed to the construction of more brick and mortar to meet the optics of short-term political expediency.

Manasseh Azure Awuni is a freelance investigative journalist based in Accra, Ghana. He has over the years investigated high level corruption and scandals that have resulted in shaping policy, saving and retrieving hundreds of millions of cedis and imprisonment of some offenders. He has won many awards including, Ghana’s Most Promising Journalist of the Year for 2010, Best Journalist of the Year for 2011 and the 2017 Best Investigative Journalist at the maiden West Africa Media Excellence Award. In 2017, his investigative series titled “Robbing the Assemblies” led to the cancellation of a $74 million government contract for the supply of waste bins. The investigation found out that the ministry did not need the bins it was procuring and that the contract sum had been inflated by at least $31million. That story and others in the series won him the Best Anti-Corruption Reporter and Overall Best Journalist at the 2018 West Africa Media Excellence Award organized by the Media Foundation for West Africa. Manasseh holds a bachelor of arts degree from the Ghana Institute of Journalism and a master of arts degree from the University of Ghana’s School of Communications Studies. Apart from his investigative work, Manasseh is also a prolific writing whose piercing pieces seek to prick the conscience of duty bearers and fearlessly speak truth power. He is the author of two books, “Voice of Conscience” and “Letters to My Future Wife.” His third book is almost ready for launching.

Ohene Aku Kwapong is founder and Managing Partner of The Songhai Group, a corporate development company, and of the Practice School, a management program focused on developing senior management for African companies. He spent several years on Wall Street, becoming, in the recent past, COO for Royal Bank of Scotland's global credit business. He was also a Senior Vice President at the New York City Economic Development Corporation where he oversaw the restructuring of the organization under then Mayor Bloomberg. Ohene Aku is a graduate of Massachusetts Institute of Technology’s (MIT) Sloan School of Management, where he studied Chemical and Nuclear Engineering, and has an MBA in Financial Engineering from Sloan School of Management. He holds a PHD in Non-linear Systems Dynamics from Columbia University. Currently on the board CDD-GHANA PAGE 4 of NORDICOM (Denmark) and Ecobank (Ghana), Ohene Aku previously held senior positions at Exxon Mobil, Deutsche Bank, Microsoft Corporation, and GE Capital.

Patrick Asare has over two decades’ experience in the U.S. energy industry. He has deep knowledge of both the electricity and gas markets. From 1995 to 2001, he worked in the Power Systems division at Caterpillar, Inc. in Lafayette, Indiana, where he initially designed electrical generators for use in marine and onshore power supply systems. He rose through the ranks at Caterpillar to become a senior electrical engineer, serving as a liaison between the company and its dealership networks in North America, Europe, Asia, and other parts of the world. Since 2003, Patrick has worked in various capacities in the Electric Power and Gas Supply departments at UGI Energy Services, LLC, a diversified energy services firm in Wyomissing, Pennsylvania. He is currently a principal in the Supply and Logistics department, where he oversees, among other things, all regulatory and risk management functions for the company’s natural gas business. Patrick has also taught in the K-12 education sector in the U.S. He has written extensively on energy industry topics, and is a frequent speaker at professional and academic conferences. Some of his energy policy articles have been widely read and commented on by readers around the world. Patrick holds a diploma in electrical engineering from Donetsk Polytechnic Institute, a master’s degree in electrical engineering from Purdue University, and an MBA from the Tuck School of Business at Dartmouth College.