One Killed, Another In Bad Condition After Aboabo Accident 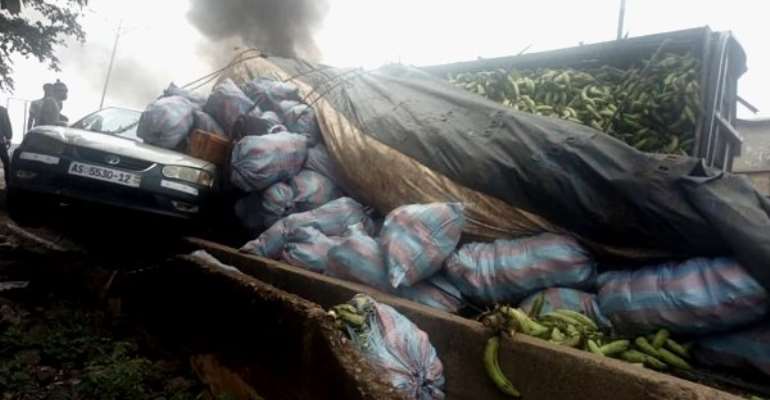 A bus conductor has been confirmed dead while his driver is in a critical condition after they were involved in an accident on the Aboabo airport stretch in Kumasi in the Ashanti region this morning.

According to eyewitness reports, the brake of the cargo truck the two were travelling in failed and crashed into three other vehicles. The truck’s semi-trailer also fell on another vehicle, a Toyota Corolla, smashing it in the process.

A health worker who was driving the Toyota with registration number AS 5530-12 narrowly escaped death.

Some residents told JoyNews many of such accidents have occurred in recent times creating fear and panic for them. Portions of the road where the incident happened was under construction to make it motorable.

Constructors have, however, abandoned the site after grading the stretch, creating a difficult situation for both motorists and passenger to use it.

Potholes among others have taken over most parts of the stretch, especially since it has started to rain again this month.

The slow pace of work has angered residents who thronged the scene of the accident to vent their frustrations.

They blocked part of the stretch and burnt tyres because to register their frustration.

It took the timely intervention of the police to call the irate residents to order.

Meanwhile, the body of the conductor has been prepared for burial in line with Islamic traditions.

Bawumia to deliver keynote address at Nottingham University ...
4 minutes ago