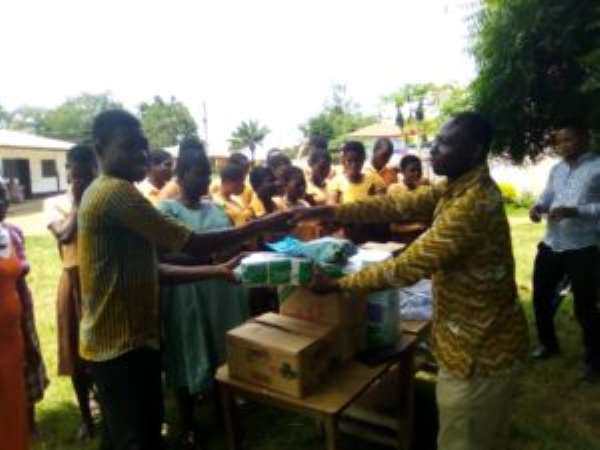 The donation, which formed part of their one year anniversary celebration include bags of rice, gallons of cooking oil, water, toilet rolls, soaps and sanitary pad among others.

Presenting the items to management of the school on Thursday, October 10, Mr Avi Sylvester NABCO District Coordinator’ said the gesture forms part of their social responsibility to the School.

He indicated, the beneficiaries who hitherto were languishing in poverty due to unemployment, decided to express their happiness in a form that will benefit the school.

On the same day, trainees show loves for clearing and cleaning the campus.

He added that the gesture though not much, but will help the students in many ways.

“We know it is small, but like the ewe's Say's "Nuvi menɔa ameƒe nume wolɔa aku o" take it and let it benefit the students, he said

The headmaster of the school applauded the beneficiaries for remembering the school even at a stage they earn little.

He is optimistic the gesture borne out of love is an indication the beneficiaries will remember society one day.

“Today you earn less but have done this big thing, tomorrow if you earn more I know you will do better things,” he said.

11th October, the trainee's organised football Mach with Mafi Kpogedey community football team, which is to marked love and unity among them.