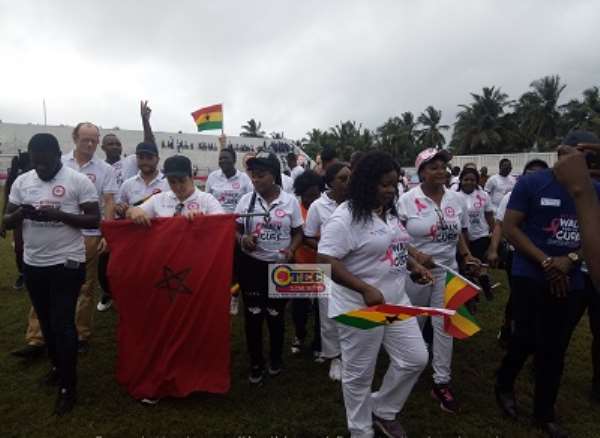 Tens of thousands of people, including some foreign nationals defied rains in the morning and joined the 9th annual breast cancer walk dubbed “Ghana Walk for the Cure” in the Central regional capital, Cape coast, on Saturday, October 12, 2019.

The event which was organized by Breast Care International (BCI) saw the enthusiastic crowd parading through the principal streets of Cape Coast to highlight the dangers associated with the deadly breast cancer disease.

On the theme “Early Detection is the Best Protection”, the event also served as an opportunity to show survivorship; that the disease is preventable, curable, treatable, hence the need for women to seek early treatment to prevent falling prey to the disease.

“It is time breast cancer is given the needed media attention and public education as the number one killer of women. If we do not shock the conscience of the public about this reality, we will wallow in self-deception and self-denial about this disturbing trend, as our women perish, though cure exists”.

The Central Regional Minister, Hon. Kwamena Duncan, in his speech while commending Dr. Wiafe and her team for their selfless dedication in the fight against breast cancer disease, urged women to consider the disease as treatable, preventable and must therefore avail their breasts for regular checkups at the hospital.

Delta Airlines, the headline sponsor for the event on four successive years, was represented by the Accra Manager, Sidione Rodrigues, said they are committed in supporting BCI to save more lives by raising awareness and funds for breast cancer research.

“This is a case that is very important to Delta Airlines and we have supported for many years, it’s a wonderful to see so many people here today and see the numbers grow every year as we raise vital awareness and to fight breast cancer in Ghana,” he gladly said.

Breast Cancer Survivors
Hundreds of breast cancer survivors were showcased in a spectacular display, with some holding flags and placards of the number of years they have survived the disease, with a call for policy makers to take the fight against cancer a priority.

“This is the cause that is very important here today and see the numbers grow every year as we continue to raise vital awareness and funds to fight breast cancer in Ghana,” he said.

The “BCI Ghana Walk for the Cure” which has assumed an international character, first premiered in the Ashanti regional capital, Kumasi in 2011, repeated in 2012 before moving to Accra in 2013.