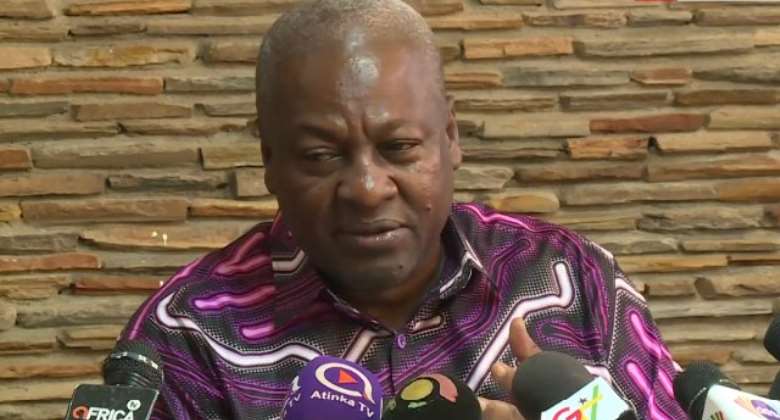 The former President, John Dramani Mahama, has commended the Ghana Journalists Association (GJA) for playing a key role in achieving political stability in the country.

"Over the years, you have fought for the respect of human rights and the rule of law," he noted.

Mr Mahama said this on Thursday in Accra, when a delegation of GJA executives, led by Roland Affail Monney, President of the GJA, called on him to officially offer him a special invitation, to attend the climax of the Association's 70th-anniversary awards.

The GJA anniversary awards come off at the Kempinski Gold Coast Hotel on November 23, 2019.

The Former President recalled that the fight against the culture of silence by journalists led to the drafting of the 1992 Constitution, which eventually led to Ghana having one of the most exemplary cases of press freedom in the world.

He said this freedom had to be maintained as much as possible and condemned all forms of intimidation of journalists, who rather needed support and confidence to effectively serve as the "ears and eyes of the society".

The Former President said the media had a strong role to play in ensuring free and fair elections, as the country approached its major polls, adding that this could be done through fair and balanced news reportage.

Former President Mahama observed that presently, the media had new battles ahead because the entire media landscape had been completely changed by new technology.

He said with the current digital media era, there was the need for continuous training of journalists, to enable them to make maximum use of the opportunities that the present situation held.

He said one typical feature of the new media landscape such as social media, was the publication of fake news, which had to be addressed as much as possible.

He noted that it was most unfortunate when people were falsely reported in the media to have made certain statements, which they knew nothing about, and urged the leadership of the GJA to continue striving for excellence in the country's journalism.

The former President urged the GJA's leadership to strive towards improving upon remuneration for journalists, in order to ensure that they had the peace of mind to carry out their mandate.

Former President Mahama pledged his support towards activities to mark the anniversary climax, and praised both the current and past leadership of the GJA, for steering the affairs of the Association successfully over the years.

Mr Monney said as the country approached elections 2020, leaders of political parties should urge their respective followers to be supportive of journalism, and completely desist from harassing journalists.

He said the effective dissemination of credible information was crucial to any successful election and added, that good reportage was best achieved when journalists were well supported to do their job.

The GJA President reminded journalists that they had the responsibility of informing fairly, without allowing their own biases to interfere with their reports.

He urged journalists to strive and maintain a high level of professional integrity, in order to earn the trust and good-will of the public.