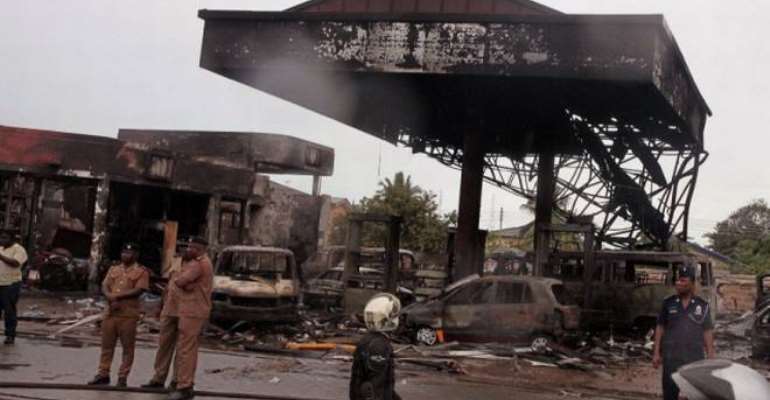 A risk assessment conducted by the National Petroleum Authority (NPA) has revealed that 67 out of 75 Liquefied Petroleum Gas (LPG) retail outlets, representing 89.3 per cent in Bono, Bono East and Ahafo regions are at high risk, the Bono Regional Minister, Mrs Evelyn Ama Kumi-Richardson, has said.

“What this simply means is that we are sitting on a time bomb for an explosion to happen, if proper measures are not put in place to solve the technical challenges,” she noted.

The meeting was aimed at educating the public about the operations of the NPA and by extension, the rolling out of the CRM of LPG distribution and solicit public input and support in the implementation process of the new LPG policy.

The policy seeks to provide direction on the marketing and distribution of LPG in a safe and efficient manner to facilitate an increase in LPG use nationwide.

It was organised by the NPA on the theme, ‘CRM: Securing Our Safety, Creating More Jobs’.

Gas explosions
Mrs Kumi-Richardson said it was most appropriate and a timely intervention by the NPA to introduce the CRM due to recent gas explosions experienced at LPG retail outlets in many parts of the country.

She said the policy was to ensure that at least 50 per cent of Ghanaians had access to safe and environmentally friendly LPG for domestic, commercial and industrial use by the year 2030.

Mrs Kumi-Richardson said steps had been taken to consolidate the activities in the LPG value chain with the view to reducing the health, safety, security and environmental risk.

“The well-being of Ghanaians remains a major priority to this government and no stone will be left unturned to ensure everyone benefits from this policy,” she stated, adding that the implementation of the policy would solve the peculiar needs of the industry and consumers as a whole.

She reiterated the government’s commitment to ensuring the security of LPG marketing companies and the LPG Operators Association.

She also assured them of the local content law, which stipulated that such venture should be fully reserved for Ghanaian equity participation, explaining that non-Ghanaians would not be allowed to operate under the model.