If Mahama lived up to the expectations, why was he voted out of office? 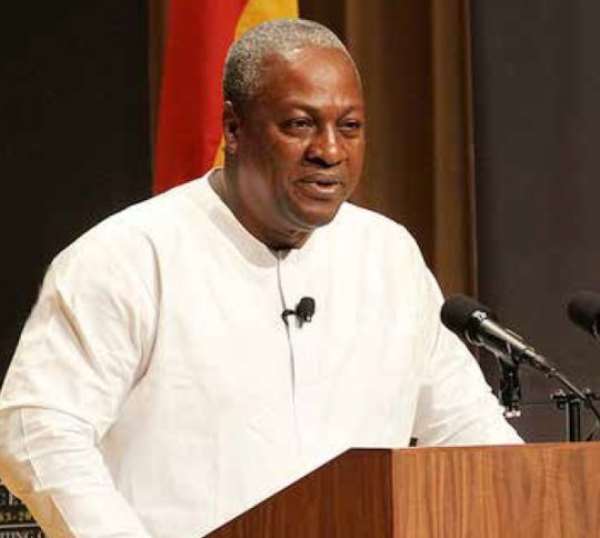 The general consensus among the vast majority of Ghanaians is that the terrible errors in decision-making in Mahama’s administration regrettably brought about profligate expenditure, inefficient tax mobilisation, calamitous high public deficit and destabilization of national budgets, excessive capital expenditure and the creation of perverse incentives that stimulated income-seeking rather than productive activities.

So it was not the least surprising at all, when discerning Ghanaians stencilled the wanton corruption and the unpardonable incompetence on their mental sheets and waited patiently for an opportune time to show the Mahama government the exit.

But despite the overwhelming doubts over Mahama’s ability to lead the country again, earlier this year, the NDC Delegates happily gave Mahama the nod of affirmation to lead the party to the 2020 general elections.

The all-important question the vast majority of Ghanaians have been asking following former President Mahama’s 2019 NDC’s flagbearership contest landslide victory is: “can the NDC’s Messiah take us to the promise land?”

If you may recall, preceding the NDC’s 2019 flagbearership race, several prominent NDC members came out and expressed grave concerns over Ex-President Mahama’s decision to join the contest.

In fact, stalwarts like Nunoo Mensah, Kojo Yankah, Ambassador Osei, amongst others suggested to Mahama to rescind his seemingly weird decision.

The NDC stalwarts concerns, however, stemmed from the fact that Ghanaians rejected former President Mahama massively in the 2016 election and therefore it will be politically suicidal for anyone to blindly clamour for his return.

The likes of Mr Bagbin, the MP for Nadoli Kaleo and the Mahama’s competitor for the 2019 NDC’s flagbearership race, attributed the humiliating defeat of Mahama and the National Democratic Congress (NDC) in the 2016 general elections to bad governance amid wanton corruption (See: ‘Mahama's boys bought V8, built mansions in 4 years – Bagbin; myjoyonline.com/ghanaweb.com, 19/08/2018).

Back then, Mr Bagbin was reported to have quizzed puzzlingly: “Don’t tell me that the boys that suddenly came closer to the president within four years can build mansions and buy land cruisers and you say there are no resources, where are they getting the money, their salaries?”

The other contestants of the NDC’s 2019 flagbearership race also emitted vehemently that former President Mahama was the main reason NDC lost the 2016 election.

Unsurprisingly, a multitude of supporters within the NDC were in solidarity with the concerned presidential aspirants.

The concerned supporters had been dreading the apocalypse of former President Mahama returning as the NDC’s 2020 flagbearer.

So, it came as no surprise at all, when a group of organisers within the opposition NDC urged the National Executives of the party to allow Mr Alban Kingsford Sumana Bagbin to go unopposed in the just ended flagbearership contest (See: Alban Bagbin must go unopposed – NDC organisers; ghananewsagency.org/ghanaweb.com, 12/03/2018).

Back then, the spokesperson for the group, declared somewhat vehemently that “since corruption would be a key campaign theme in 2020, and the fact that former President Mahama administration had issues with corruption, Ghanaian voters would be forced to reject him if he was to be elected as the next flagbearer.”

Even though the loyalists of the other presidential aspirants held the preponderance of the argument about former President Mahama’s unsuitability for the 2020 flagbearership position, the diehard supporters succeeded in their quest to have him as their presidential candidate.

It would, therefore, appear that the vast majority of the NDC loyalists are living in a denial about former President Mahama’s inability to steer Ghana into the right direction, and hence choosing him over the other presidential aspirants.

It is also quite ironic that despite Mahama’s coarse governance which brought about his humiliating defeat in the 2016 election, the Mahama loyalists are holding an elusive hope that they can present him and recapture power from NPP in 2020.

However, some of us, as a matter of principle, do not envision former President Mahama’s imminent return to the presidency, judging from his dreadful errors in decision-making which brought about the massive economic collapse.

The unbridled corruption, the arrogance of power and the irreversible incompetence which culminated in economic collapse are still fresh in the memories of discerning Ghanaians.

Unfortunately, however, the brassbound Mahama loyalists do not want to acknowledge the fact that Ghana’s economy was in such a terrible state because a large portion of the country’s scarce resources went down the drain through mismanagement and the wanton corruption perpetrated by the officials of the erstwhile Mahama administration.

If you may recall, following the NDC’s 2016 humiliating election defeat, the party leadership set up a 13-member committee, presided by former Finance and Economic Planning Minister, Professor Kwesi Botchwey with the sole mandate of travelling to the length and breadth of the country to interact with the grassroot supporters and investigate the causes of the historic defeat and put forward recommendations accordingly.

Credible sources had it that the Botchwey Committee’s report indicted former President Mahama, the NDC’s 2016 flagbearer as the main cause of NDC’s humiliating defeat.

The report is alleged to have put the blame at the doorsteps of former President Mahama for blatantly ignoring party structures and happily mingling with the likes of Madam Akua Donkor during the 2016 electioneering campaign.

The Kwesi Botchwey Committee’s report is alleged to have suggested that any future flagbearer of the party must, as a matter of principle, work collaboratively with the party structures by bringing on board the national and regional executives, polling agents and those at the grassroots to assist in electioneering campaign.

The report is said to have alluded to the fact that the blatant snubbing of the grassroots, including some prominent members of the party during President Dramani Mahama’s reign largely contributed to the NDC’s election loss.

On the issue of corruption, the Botchwey Committee’s report is quoted to have stressed that the then flagbearer of the NPP, Nana Akufo-Addo, who is the incumbent President, took advantage of his well-received incorruptible descriptive label to the disadvantage of NDC’s flagbearer, former President Mahama, who was perceived to have endorsed corruption in his government.”

Interestingly, however, some aggrieved party supporters have been insisting vehemently that former President Mahama flagrantly turned a blind eye to their concerns over his needless association with ‘electioneering campaign money grabbers’.

The concerned party loyalists have since been decrying the actions and inactions of the numerous fan clubs for Mahama 2016.

The aggrieved diehard NDC supporters beef stemmed from the fact that although the vast majority of the Mahama fan clubs members were novices in electioneering campaign, they were entrusted with such a responsibility regardless.

Somehow, former President Mahama’s association with the novices and the poor economic management incensed the vast majority of party faithful, who even threatened to boycott the 2016 general elections.

The NDC faithful, however, maintained that the straw that broke the camel’s back was when President Mahama strangely metamorphosed into ‘Father Christmas’ and unjustifiably gave away large portions of Ghana’s scarce resources to party apologists like Madam Akua Donkor of Ghana Freedom Party (GFP), who received two four wheel drive cars and a luxury bungalow (estimated to cost a staggering $470,000) for no work done.

As a result, prior to the 2016 general elections, there were numerous disturbing publications on the rebellious NDC supporters.

Somehow, former President Mahama is refusing to acknowledge the fact that his calamitous errors in judgement amid rampant corruption, untold economic hardships and business crippling dumsor largely contributed to his 2016 humiliating election defeat.

How can Mahama blame everyone else for his rejection by discerning Ghanaians, when his sibling Ibrahim Mahama revoltingly took advantage of his presidency and blatantly refused to pay import taxes to the tune of over GH12 million?

Why must Mahama blame innocent people for his historic defeat when he egregiously gave away 58% of Ghana’s bauxite to his sibling Ibrahim Mahama to the utter disgust of discerning Ghanaians?

How could former President Mahama fecklessly give apologists like Madam Akua Donkor of Ghana Freedom Party (GFP) two four wheel drive cars and a luxury bungalow (estimated to cost a staggering $470,000) for no work done, and then turn around and blame others for his historic election defeat?

So does Ex-President Mahama think Ghanaians still suffer from chronic memory loss and can keep taking everyone else for granted?