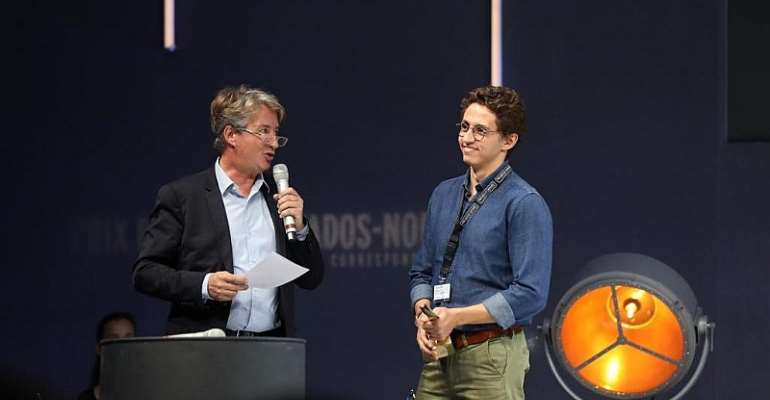 The Bayeux-Calvados Normandy Awards for war correspondents were presented at a ceremony in Bayeux on Saturday evening. RFI's Sami Boukhelifa won first prize for his radio piece on the fall of the Syrian village of Baghouz, where jihadists held their last patch of territory until March 2019.

For over 20 years, the town of Bayeux, in association with the Calvados Department and the Normandy Region, has been hosting this event to pay tribute to journalists who work in hazardous conditions and remember those who have perished.

Bayeux, the first town in France that the Allies liberated in 1944, launched this annual international event in the framework of the 50th anniversary of D-Day in 1994.

More than forty in the jury, headed by Gary Knight

More than forty war correspondents gathered in Bayeux for two days to debate and award trophies to journalists from around the world working in four media: the written press, radio, television and photography.

War photographer Gary Knight was the jury president and host for the event's 26th year, which also featured screenings and conferences throughout the week.

Patrick Chauvel, a freelancer for the weekly Paris Match won first prize for photo, for his work on Syria, "Syrie, la fin de Baghouz" (Syria, the end of Baghouz).

Patrick Chauvel also won the prize chosen by the public.

Fritz Schaap of Der Spiegel newspaper won the written prize award, for his project entitled "An epidemic and a war", focusing on the Democratic Republic of Congo.

In television reporting, first prize went to BBC journalists Orla Guerin, Lee Durant and Nicola Careem for their documentary report about a bus hit by an air raid in Yemen.

Made in March 2019, in the north of Syria, Boukhelifa's report focuses on the battles between Kurdish soldiers, supported by the international coalition as they entered the final stages of the war against the Islamic State armed group.

Sami Boukhelifa was able to report from the village of Baghouz, capturing the moments just before the collapse of the last major jihadist stronghold in the country.

Wilson Fache was awarded the Young Reporter Trophy for print journalism for his article on Gaza published in L'Orient-le jour, The National newspaper and Vice.

Reporting on the crisis in Kashmir won Clément Gargoullaud and Shafat Farooq the Grand Format Television Trophy (Babel Press for Arte), as well as the Video Image Trophy.

The winner of the Television Trophy - Regional Prize for students and trainees of Normany went to AFP TV for a report on Venezuela called "Crisis at the border".

To ensure that the names of the journalists killed in the line of duty are never forgotten, the City of Bayeux, in collaboration with Reporters without borders, erected a Memorial in 2007.