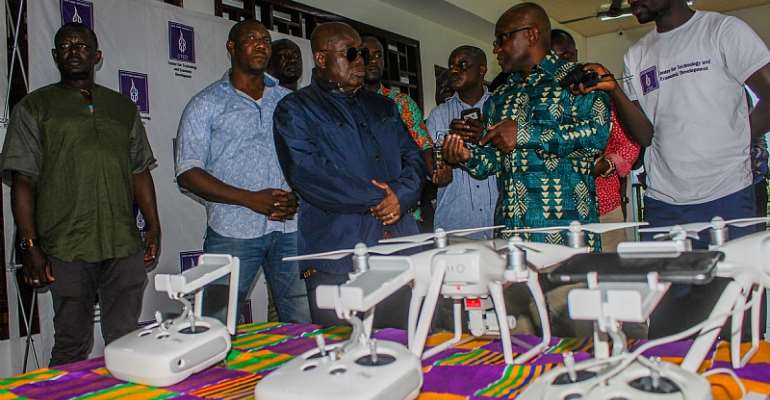 The purpose of his visit was to afford him the opportunity to learn about Commodity Exchange Research.

Mr. Akufo-Addo was visibly elated as Prof. Yaw Nyarko, an economist at New York University, walked him through the activities of the Center and Commodity Exchange Research.

Initially, the Food and Agriculture Minister was outside the hall where the President was being taught, but as Mr. Akufo-Addo became much more interested in the activities of the Center, he asked for his Agric Minister to join him.

Dr. Afriyie-Akoto upon entering the hall, immediately identified with the NYU Research Center and told the President that the project of CTED forms part of some of the highly innovative projects the Ghanaian Government through the Food and Agriculture Ministry, was exploring to promote and sustain food production and security.

"...Really nice. The project is so important," the excited Ghanaian President, told Prof. Nyarko as he was being walked through the operations of the Center and Commodity Exchange Research.

The drones were on display at the Center and caught the attention of the President.

CTED is working with about 300 smallholder farmers nationwide.

Speaking to journalists after seeing the President off, Prof. Nyarko said efforts were being made to reach out to more farmers.

He stated there was the need to support farmers in Ghana and as well attract more youth into the agricultural space through the introduction and use of smart technologies.

Prof. Nyarko has long studied the economic impact of commodities exchanges in Africa looking at how farmers can adopt new technology, like mobile phone apps for trading for growing their businesses and transforming agricultural value chains.

He is in partnership with Chris Udry, one of the donors of CTED, currently conducting a national survey that focuses on output markets in sub-Saharan Africa, using Ghana as the principal study area.

The main hypothesis is that smallholder farmers are acutely aware of incentives they face, and with somewhat steady predictable output markets, provide the right incentives for African farmers to make the economic decisions that many researchers find unacceptable.

Prof. Nyarko’s research uses two interventions: firstly, a mobile phone app that enables the reduction of product market search frictions in small areas and communities. Secondly, ongoing panel surveys across all regions of Ghana to evaluate the effects of the introduction of a national commodity exchange aimed at fostering sustained, active agricultural output markets at the national level.

The research evaluates the impact of the newly established Ghana Commodity Exchange (GCX) to document the changes in commodity value chains associated with the introduction of the exchange including to identify the effects of these changes on the decisions and welfare of smallholder farmers and their families.

For several years, Prof. Nyarko has worked with the Ghana government to advocate for the establishment of a commodity exchange and has a history of linking smallholder farmers to Ghana’s leading policymakers from the Ministries of Food and Agriculture, Trade and Industry, and Finance to engage them in the research process.