NDC Embarks On 'Thank You' Tour In Ayawaso East After Primaries 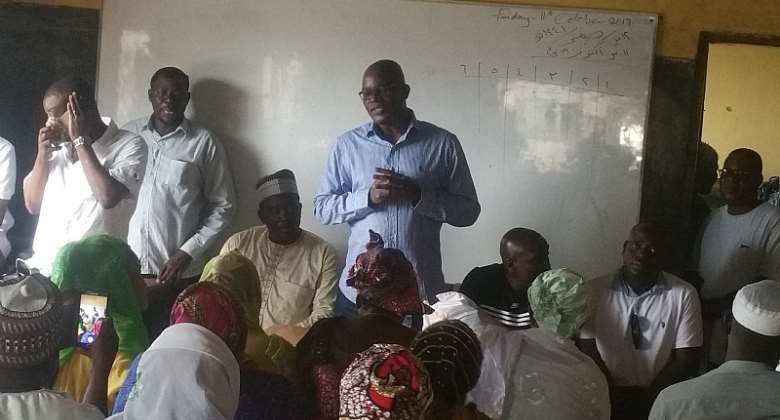 The MP disclosed that for the first time in the history of the NDC in Ayawaso East , an unsuccessful candidate is seen joining forces with the parliamentary candidate elect, to tour and thank delegates and party faithfuls.

The MP popularly known as McNaza made these revelations during a 'thank you' tour by the NDC in the constituency where he attributed the success and peaceful nature of the tour to Dr. Azindow for his acceptance to join him in the interaction with delegates.

He pointed out that unlike the aftermath of previous primaries which has created post-election enmity, hatred and rancour among winning and losing candidates and their respective supporters, this particular contest with Dr. Azindow has recorded post-election unity and friendliness.

The unity shown by the two opponents after the race, he added is a symbol of great victory for the party come the 2020 general elections.

He used the opportunity to applaud the efforts of the constituency , branch and ward executives as well as delegates for the manner in which the primaries was conducted.

He challenged both constituency and branch executives not to go to sleep but to start working for victory 2020 now. " We must all work hard in order to win for John Mahama and to retain the Ayawaso East seat for the NDC".

The two time Parliamentarian seized the opportunity to tasked all non-vibrant party branches to be active and more vibrant to canvas more votes for the umbrella party.

Hon. Nasser Toure reminded all branches that failed to take advantage of opening bank accounts during the primaries campaign period to do so now at his office or forget it.

"Serious party work starts from now and that all financial support for any branch shall be paid directly into individual branch bank accounts," he emphasized.

In his response, Dr. Yakubu Azindow pledged to wholeheartedly support Hon. Nasser Toure to win massively and retain the seat and urged his supporters to also do same.

He noted that the purpose for which he joined the primaries contest has been fully achieved and that he has no regret in the outcome.

He called on all to forgive each other adding that during the heat of their electioneering campaigns, they might have wronged or stepped on each other's toes, either deliberately or indirectly.

"I have forgiven anyone who had wronged me and I am also using this platform to apologize to anybody I had wronged knowingly or otherwise," the political scientist stressed.

He stressed, "The primaries is over and this is the time for us to come together to work as a formidable team to conquer our arch-rivals , the ruling New Patriotic Party, ( NPP)."

The NDC Ayawaso East Chairman, Alhaji Olabode Williams, on his part, commended both Nasser Toure and Dr. Azindow for the unity and brotherliness they exhibited especially after the primaries.

"The bond of unity gives the indication that we are poised for a massive victory come November 2020," the Chairman added.

He also touched on the forthcoming Assembly elections which according to him is very important for the NDC as a party and John Mahama as the flagbearer.

Chairman Olabode Williams pointed out that the NDC has special interest in the assembly elections, hence putting some names forward to contest on behalf of the party even though assembly elections were supposed to be independent.

He urged the party followers especially constituency and branch executives to support and campaign massively for the respective individuals chosen by the party to contest the Assembly elections in December, 2019.

Present at the ceremony was the NDC's Greater Accra Zongo Caucus Coordinator, Hon. Ismaila Ali Horoya, who also underscored on the need for the present unity in the party at the constituency level to be maintained ahead of next year's general elections.

He said fortunately Ayawaso East was not part of the flashpoints for the party where disputes are been settled after the just ended primaries.

This, the Zongo Caucus Coordinator, refers to as a symbol of hardwork and unity from the hierarchy to the grassroots which must be retained and improved upon.