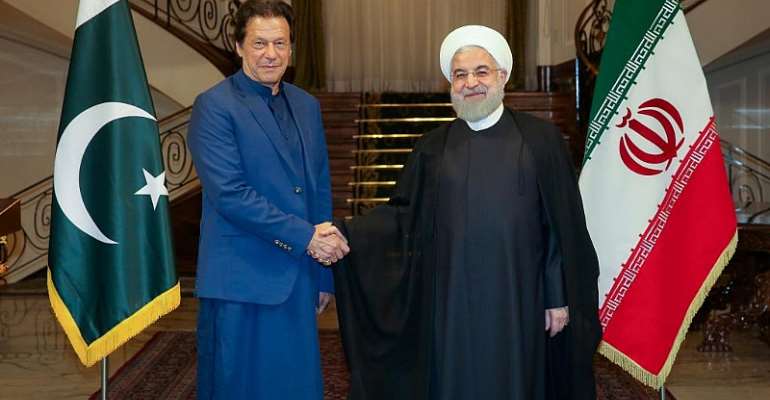 Pakistan's Prime Minister Imran Khan visited Iran on Sunday following a request from the United States and Saudi Arabia for him to try to defuse rising tensions in the Gulf. It is his second visit this year to Iran, which shares a border of about 1,000 kilometres with Pakistan.

Khan's office said his visit was part of an initiative "to promote peace and security in the region", and that he would hold talks with Iran's supreme leader Ayatollah Ali Khamenei and President Hassan Rouhani.

Khan landed in Tehran and was greeted at the airport by Foreign Minister Mohammad Javad Zarif before going into a meeting with Rouhani.

Iran's Mehr News Agency played down Kahn's visit but quoted Iranian Foreign Ministry Spokesman Seyyed Abbas Mousavi as saying that "the Islamic Republic has announced that it is always ready, with or without a mediator, to hold talks with its neighbors, including Saudi Arabia."

Washington accused Tehran of attacking the vessels with mines and of being behind the drone assault, something it strongly denies.

Pakistan has strong relations with Saudi Arabia, with more than 2.5 million of its nationals living and working in the kingdom.

But it also maintains good relations with Iran and represents Tehran's consular interests in the United States.

The Arabian Al Arabyia website reported that Kahn will travel to Riyadh to meet with Saudi leaders.