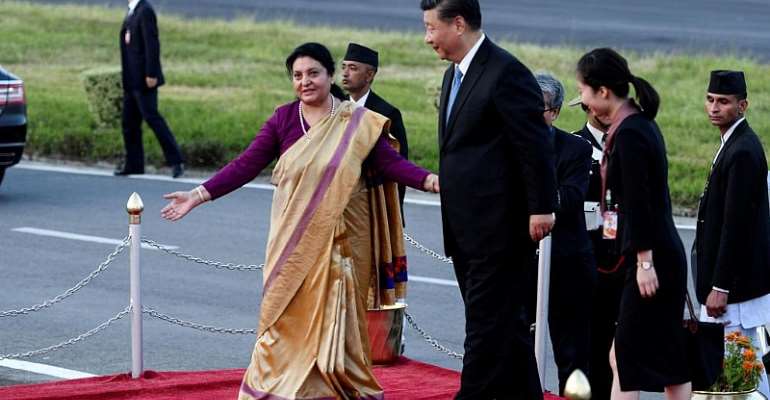 Nepal rolled out the red carpet this weekend for China's President Xi Jinping and rounded up Tibetans to prevent protests during the first state visit by a Chinese leader in 23 years. After two days of talks in neighboring India, Xi is keen to push Beijing's controversial Belt and Road infrastructure projects.

India has traditionally been Nepal's main ally, but over the years, China has intensified its presence in the impoverished Himalayan nation, pumping millions of dollars into projects ranging from roads to hydropower plants.

In spite of a diplomatically smooth visit to India, Beijing and New Delhi remain suspicious of each other, with India insisting that China's Belt and Road Initiative is a violation of its sovereignty as parts of it are projected in Pakistani parts of Kashmir claimed by India.

Friendship and cooperation In a signed article published in Nepali newspapers on Friday, Xi said he would use the two-day visit to "renew friendship and explore cooperation with my Nepali friends".

"It is important that we adopt a strategic and long-term perspective and draw up a blueprint for our bilateral relationship to take it to a new height in this new era," Xi added.

A total of twenty MoU's were signed during the visit, hosted by President Bidhya Devi Bhandari, aimed at facilitating future Belt and Road projects.

One of them was a feasability study for a railroad that is to cross high-altitude Himalayan passes connecting China and Nepal.

In 2017, Nepal formally signed up the the BRI. Its main objective: getting cheap funding for a trans-himalayan, 72 kilometre railroad from the Tibetan district of Kyirong to Kathmandu, Nepal's capital.

To date, Nepal has only one, 30 kilometre railway line which runs from the city of Janakpur in the south east to Jayanagar, across the border with India.

India, worried it is losing its foothold in Nepal, has persuaded Kathmandu to jointly work on a 78 km cross-border oil pipeline.

Tension for Tibetans Meanwhile, the International Campaign for Tibet (ICT), a Washington-based pressure group, said at least 18 people were arrested in the days ahead of Xi's arrival. These included two Nepali shopkeepers selling bags with Tibetan flags or slogans. Fourteen remained in detention on Saturday.

In 1959, Beijing sent soldiers to crush a revolt in Tibet against Chinese rule, prompting the Dalai Lama, Tibet's spiritual leader, to flee to India where he remains today.

Nepal is home to around 20,000 exiled Tibetans, but under pressure from Beijing the communist government has taken an increasingly hardline stance on their activities.

Extradition treaty Human Rights organisations also worry that Nepal and China will sign an extradition treaty which would allow people, seen by China as “criminals,” including what Beijing calls “Tibetan separatists,” followers of the Dalai Lama who promote Tibetan independence, to be extradited and prosecuted in China.

In a joint statement dating back to 2018, China and Nepal agreed to "negotiate the Treaty on Mutual Legal Assistance in Criminal Matters and Treaty on Extradition."

The treaty would be similar to the one proposed in Hong Kong, the announcement of which triggered months of violent protests before it was shelved.

The statement issued on Sunday by the Nepalese Ministry of Foreign Affairs, including a list of signed agreements between China and Nepal, showed a “Mutual Legal Assistance in Criminal Matters” but did not mention the extradition treaty.