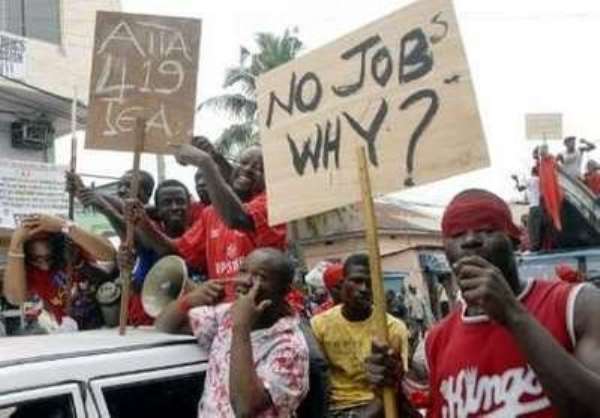 The Commission on Human Rights and Administrative Justice (CHRAJ) has expressed concern over the deep taste for corruption in the country.

The Commission says it is having a huge bite on the country’s employment rate and development.

The Commission said the falsification of people’s ages and documents coupled with numerous abandoned government projects are some corrupt acts and actions that are denying competent and qualified graduates the opportunity for employment.

Godfrey Ebo Arhin, a Senior Investigator at the Greater Accra Regional Office of CHRAJ, said this while addressing students of the African University College of Communications (AUCC) on Thursday.

The event was held under the theme: “Enhancing public accountability and environmental governance”.

The forum, organised by the Greater Accra Regional Directorate of National Commission Civic Education (NCCE), was to empower citizens to demand accountability from duty bearers to enable them to report all acts of corruption to appropriate authorities.

“Just a few years ago there was a whole association of graduate unemployment, which means we have young men and women who have left school, qualified but are not getting work to do. The reason is that there are a lot of people in organizations who are due for retirement but because they have falsified their ages they are yet to depart from the organisation. This is stalling the chance of those who have the competence and the needed qualifications to be in such positions”, Mr Arhin said.

He added that “we have so many government projects which have been abandoned in the villages, communities which when completed will have provided employment for these people or the money could have been channelled into different job creation ventures and other developmental projects to facilitate development but all have been wasted”, he said.

Mr Arhin called on the public to take advantage of the available anti-corruption Acts to help ‘nip the canker in the bud’.

Lucille Hewlett Annan, the Greater Accra Regional Director of NCCE, said the forum was to educate the students in order to empower them to take up the mantle against corruption.

She urged students to have the courage to report to the appropriate anti-corruption authorities all acts of corruption, including littering of the environment, among others in order to achieve a corruption-free society.

Abigail Fosua Koranteng, a student and a participant at the forum, also called for a change in the mindset of the citizenry, especially among the youth towards the concern.

This, she said, is critical if corruption was to be a thing of the past and development was to be attained.

The forum forms part of the Commission’s Anti-corruption, Rule of Law and Accountability Programme (ARAP) and the National Anti-corruption Action Plan (NACAP) initiatives funded by the European Union (EU), targeted at reducing corruption and improving accountability, probity, transparency and compliance of the citizenry to the Rule of Law.