Ghana’s Cocoa Farmers Are Trapped By The Chocolate Industry 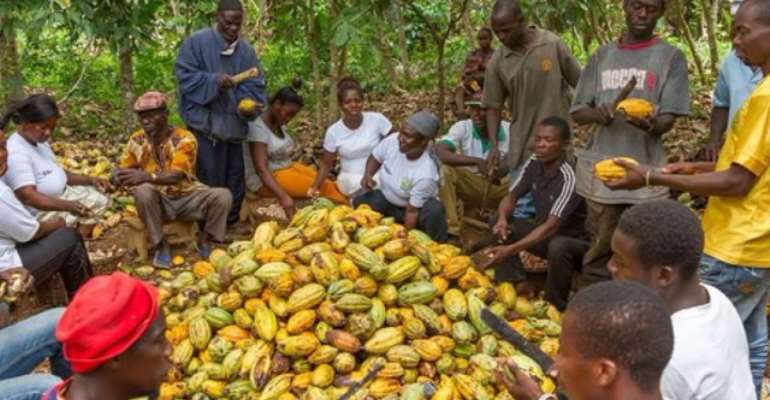 The chocolate industry is worth more than $80 billion a year. But some cocoa farmers in parts of West Africa are poorer now than they were in the 1970s or 1980s. In other areas, artificial support for cocoa farming is creating a debt problem.

Farmers are also still under pressure to supply markets in wealthy countries instead of securing their own future.

In research published last year, I explored sustainability programmes designed to support cocoa farming in West Africa. My aim was to identify winners and losers.

I looked at initiatives such as CocoaAction, a $500 million “sustainability scheme” launched in 2014, and concluded that they were done in the interests of large multinationals. They did not necessarily relieve poverty or develop the region's economies. In fact they created new problems.

To sustain their livelihoods, the cocoa farmers of Côte d'Ivoire and Ghana need to diversify away from cocoa production. But multinational chocolate companies need farmers to keep producing cocoa.

Cocoa farming requires tropical forestland. This is limited; it is not possible to keep expanding to new land to keep producing cocoa. So when the land is exhausted, farmers would benefit from diversifying to products like rubber and palm oil. They do not need to grow cocoa for its own sake.

A great deal of diversification occurred during the cocoa crisis of the 1970s in Ghana. Cereal output increased from 388,000 tonnes in 1964/1965 to over 1 million tonnes in 1983/83, and decreased when cocoa was “revitalised” . The same was the case with coconut, palm oil and groundnut.

But such diversification is more recently being prevented by multinationals and other stakeholders who want cocoa cultivation to continue. Multinationals that depend on cocoa as a raw material openly (and rightly) regard diversification as a risk to their business. So they keep spending on cocoa farming inputs.

Why there's a limit to cocoa

In West Africa, cocoa has historically been cultivated using slash and burn farming. Forest was cut down and burned before planting, and then, when the plot became infertile, the farmer moved to fresh forestland and did the same again.

This explains the link between cocoa farming and deforestation in Côte d’Ivoire and Ghana. A recent investigation showed that since 2000, Ivorian cocoa has been dependent on protected areas. Almost half of Mont Peko National Park, for example, which is home to endangered species, as well as Marahoue National Park has been lost to cocoa planting since 2000.

Forestland is finite. Slash and burn is no longer an option, because so much of the forest is gone. In West Africa, planters are now staying on the same piece of land and reworking it.

This has created its own set of problems.

In both Ghana and Côte d'Ivoire, several estimates of the cost of maintaining a cocoa farm show that the investment costs required for replanting have approximately doubled. One estimate of labour investment put the replanting effort at 260 days per hectare, compared with 74 days per hectare for planting using slash and burn.

The extra labour needed for sedentary cultivation is leading to child trafficking and child labour in cocoa cultivation. Child trafficking generally occurs when planters are searching for cheaper sources of labour for replanting.

There has also been a massive increase in the use of fertilisers and pesticides to aid cocoa production without slash and burn.

The increased input (labour, fertilisers and pesticides) for replanting land amounts to a higher production cost. It cannot be adjusted by price setting. Cocoa producers have no control over price; they are price takers. So the higher production cost reduces the profit made by cocoa farmers.

This explains why cocoa producers in Côte d'Ivoire are poorer now than they were decades ago.

In Ghana, the government, through the cocoa marketing board, COCOBOD , has managed the transition from slash and burn to sedentary farming. The government created a mass spraying programme to control diseases and pests. It also subsidised fertiliser and created a pricing policy that has sometimes amounted to a government subsidy these links need users to subscribe. Due to the extra free input provided by the government, sometimes supported by NGOs and multinational corporations, farmers have not become poorer in Ghana. But the approach has led to huge debt for COCOBOD . For example, COCOBOD incurred GHc2 billion (US$367 million) debt for subsidising the price of cocoa for the year 2017.

Although cocoa planters are faring well in Ghana, it is not clear that Ghana's cocoa sector is really a success story. The shift to debt financing has artificially produced success.

Cocoa “sustainability” activities are not the way forward. Cocoa sustainability is a new form of colonisation in Africa, because its real goal is to prevent African planters from diversifying away from cocoa into other crops. These programmes keep the cocoa industry going under deteriorating conditions.

The way forward is to switch from cocoa to crops that do not require forestland (new or exhausted), extra fertilisers or more labour.

Research has shown that cocoa planters in Côte d'Ivoire who have diversified into other crops, such as rubber, have succeeded in escaping poverty.

But that is seen as a major threat to the supply of raw material to Western multinationals. One representative of a large chocolate multinational explained: “ my enemy is not my competitor in the purchase of cocoa, but the rubber industry .”

Latest Photo Reports
Catch up with all the political quotes from our politicians.
Advertise here
More Article
ModernGhana Links
War devastates the lives of children: what the research tells us, and what can be done
Kenya's next election is in view: the struggle between elites and rule of law is intensifying
Victims of Habré's rule haven't been paid a cent of the compensation due to them
Want to know about vaccine rollouts in Africa? Click on a country here and find out
Marburg en Guinée : la valeur des leçons tirées de la gestion d'autres épidémies de fièvre hémorragique
COVID-19 pandemic receives less public sensitization attention in a Ghanaian print media — IBNA research
A grass native to Africa could transform the continent's dairy yields. Here's how
We can't banish COVID-19. But we can end the pandemic with vaccinations
My findings about the sanitation conditions in Nigeria's Ile-Ife point to a bad situation
TOP STORIES