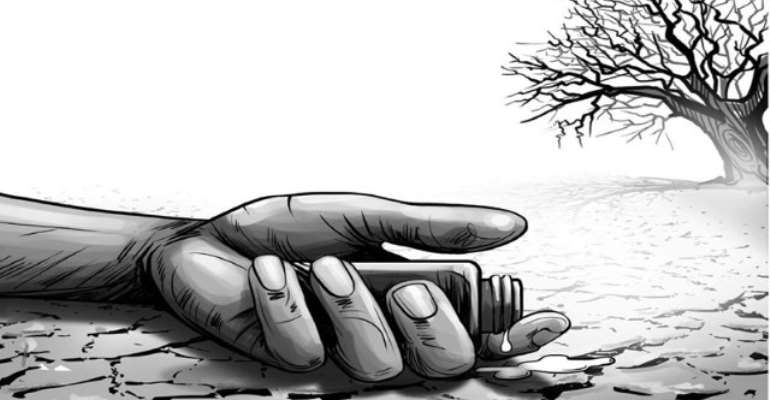 Six cases have also been reported in the three regions from January to June, this year and victims are mostly young men between aged 20 and 35 years, including a-12-year-old class four-girl.

Speaking at a forum to mark this year’s celebration of the World Mental Health Day held at Dotobaa, a farming community in the Nkoranza Municipality of the Bono East region, Mr Yere said people who committed suicide had serious mental health problems.

The Alliance for Mental Health Development, a group made up of civil society organisations and actors, traditional authorities, assembly members and religious bodies in collaboration with MIHOSO International, a health centred NGO with support from BasicNeeds Ghana, an international NGO organised the forum.

Prior to that, school children and youth groups carried placards with inscription such as “Suicide is not a normal response to stress”, “Together we Prevent Suicide”, and “Suicide is a Mental Condition”, held processions through the community.

The procession was aimed at sensitising the community and to rally their support towards addressing mental health issues in the area.

Mr Yere indicated that cases of mental health problems were recording alarming figures among young men and women in the regions, with depression, substance abuse and economic hardships contributing to suicides and attempted suicides.

He said epilepsy was also recording disturbing figures in the three regions and called for concerted efforts to tackle the problem.

Mr Yere emphasised that epilepsy and mental health, in general, was not a curse, and could be managed and treated if patients sought early medication, and advised parents to refrain from hiding their epileptic children in homes.

Instead, parents and caregivers must support them to seek medication and ensure that patients take a full course of their drugs.

Thomas Benarkuu, the Deputy Director of Programmes, MIHOSO International and Convener of the Alliance in Bono, Bono East and Ahafo Regions, said globally, 800,000 people die from suicide every year.

Estimates in Ghana indicate that 1,500 suicide cases were recorded in 2015, an indication, he said required urgent attention in addressing mental health problems in the country.

Mr Benarkuu expressed concern over lack of logistics and transport for mental health coordinators to undertake health outreach programmes and appealed to NGOs, and development partners to support them with motorbikes.

He said the intermittent shortage of drugs for mental health patients in the country remained a challenge and called on government to find lasting solutions to the problem.

George Kwame Osei, the Nkoarnza Municipal Mental Health Focal Person, noted that regular shortages of drugs were affecting the treatment process of patients saying their conditions worsened if they did not complete the course of drugs.

He also expressed concern over the high cost of mental health drugs and called on the government to ensure that the National Health Insurance Scheme captured mental health for patients to easily access drugs to aid their treatment process.