France cancels arms sales to Turkey, amid international protests against its Syrian offensive 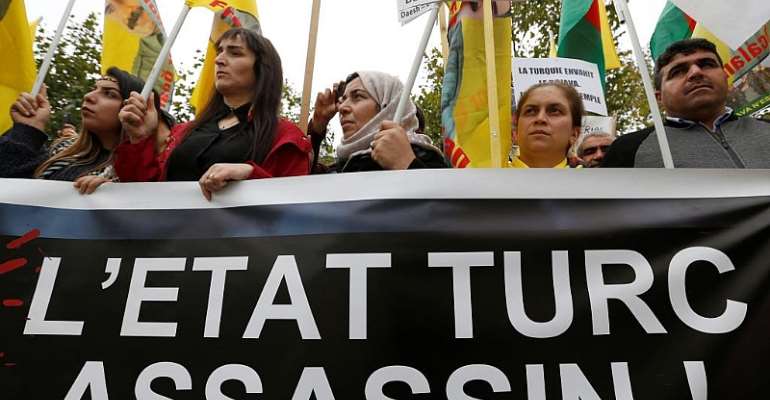 France on Saturday suspended arms exports to Turkey over its offensive into Syria against Kurdish fighters, as protesters denounced Ankara at rallies in several European cities.

In a joint statement from the defence and foreign ministries, France said it had suspended all planned exports of "war materials" to Turkey that could be used in their offensive into Syria.

Turkish soldiers on Wednesday launched a cross-border assault against Kurdish fighters Turkey sees as terrorists in defiance of international criticism and threats of sanctions.

The Syrian Observatory for Human Rights said that at least 38 civilians and 81 Kurdish fighters have been killed on the Syrian side since start of the assault.

The Paris statement came hours after Germany, one of Turkey's main arms suppliers, also said it had suspended exports.

Finland, Norway and The Netherlands have already announced that they are stopping arms exports to the country.

A meeting in Luxembourg of the European Union's foreign affairs committee on Monday will decide on a coordinated European approach to the issue, French statement said.

Demonstrations in Paris, Vienna, Athens
Thousands of people marched in several European cities Saturday to protest against the Turkish assault.

"Turkey is invading Rojava (the self-proclaimed Kurdish zone in northeast Syria) and Europe is watching," they shouted as they marched towards Chatelet in central Paris.

Protesters marching under the Kurdish green, red and yellow flag waved placards reading "Trump = serial killer" in refernce to President Donald Trump's order for American troops to pull back from the border earlier this week.

Trump has faced a storm of criticism for abandoning a loyal ally in the US-led campaign against the Islamic State group.

"Turkey is trying to carry out an ethnic cleansing and reinforce jihadism ... to make the West kneel," said Agit Polat, spokesman for the Kurdish Democratic Council in France, speaking in Paris.

"Since the beginning of the Turkish army invasion operation dormant Daesh cells have committed attacks."

"At all costs, there must be concrete economic sanctions from the European Union and the United States vis-avis Turkey," he added.

Polat also urged France to recall its ambassador to Turkey.

Several French politicians from leftist to green took part in the Paris march.

"It is historical nonsense what is happening in the north-east of Syria because they are the most faithful allies of France" said Eric Coquerel, a lawmaker for the radical left France Unbowed party.

There were similar protests in other French cities including Marseille, Strasbourg, Bordeaux, Lille and Grenoble.

Pro-Kurdish protests were also held across Germany with more than 10,000 participants in Cologne, according to news agency DPA.

Similar protests were staged in Budapest, The Hague, Warsaw, Brussels and Stockholm.