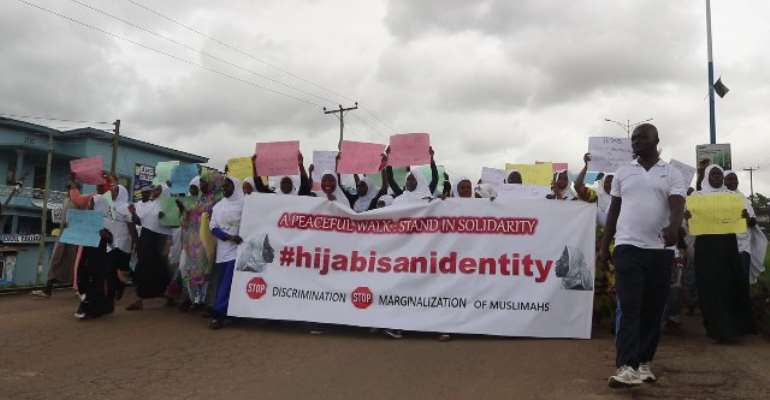 Muslim women in Kumasi, the Ashanti Region capital Saturday embarked on a street protest against “persistent harassment by schools heads and other state institutions over wearing of hijab”.

A hijab is a veil worn by some Muslim women and usually covers the head and chest. It is an important symbol of the Islamic faith.

Protestors, including some Muslim men, have vowed to protect their religious rights insisting they have equal rights before the law in all national life.

“We shall end conspiracies to stop young girls from wearing hijab to school or to work,” some of the women chanted.

Although there have been calls for the rights of Muslim women to be respected when they wear hijab, opposition to Muslim ladies wearing the veil is rife, according to the protestors.

Campaigners say the right of girls to education is under threat because school officials either shut the doors to them or taunt and punish them for their beliefs.

Leader of the protest march, Rahinatu Boamah Agyemang, told JoyNews the age-old discrimination against women and girls wearing the hijab must end immediately.

“We plan to carry out several activities to call for respect for Muslim women in every sector of the society,” Rahinatu added.

Many of the young women who joined the walk vowed to wear the veil in a bid to end the negative stereotypes about Muslim women wearing the religious garment.

One of them, Hawa Abdul-Karim said “the walk is a great idea for me and my colleagues. It will empower, enlighten and break barriers for us.”

Deputy National Chief Imam, Sheikh Mohammed Kamil Mohammed, who also joined the walk, encouraged Muslim women not to give up the hijab over the discrimination.

He said the Muslim community will continue to demand equal rights no matter how long it takes.

Sheikh Kamil called on the government to direct all agencies to stop unwarranted discrimination against Muslim women over hijab.

He is confident, other Muslim leaders will join the campaign to ensure young girls are given their legal rights to wear hijab.

Member of Parliament for Asawase, Muntaka Mohammed also joined the march in Kumasi on Saturday.

An Islamic committee is already in place to receive complaints of discrimination over hijab.

A case of discrimination against a Muslim wearing hijab is currently pending before the Supreme Court.

Muslim women hope a favourable ruling will bring an end to the problem.