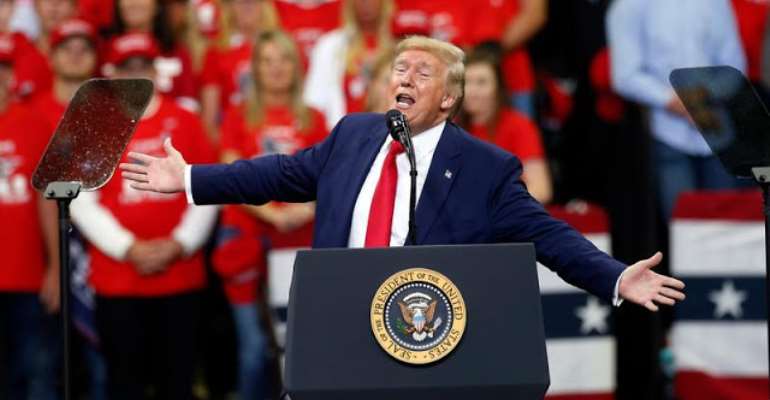 There is a reason Donald Trump is different from all American presidents. He does things past American leaders didn’t do and also says things no American leader said.

At a rally on Thursday, President Donald Trump mocked the Democratic and former vice-president under the Obama administration, Joe Biden, that he "understood how to kiss Barack Obama's ass."

Trump didn’t only mock Joe Biden but also his son, Hunter Biden at length, accusing them of corruption.

According to Trump, "The Bidens got rich, and that is substantiated, while America got robbed," Trump said. "Sleepy Joe and his friends sold out America."

Trump has asked the Ukrainian President Volodymyr Zelensky to investigate and obstruct the run for the White House of the former vice president.

The crowd then re-launched the slogan 'in jail' addressed to Joe Biden, the same style used against Hillary Clinton, Trump's Democratic rival at the 2016 presidential election.

Trump accused Biden of trying to have a Ukrainian prosecutor removed in 2016 when he was still serving as vice president because he was investigating the Burisma company, where Hunter worked as a board member.

"The Democrats are sick and crazy people, who investigate the president to clear your 2016 vote as if he had never existed. They want to cancel your voice and your future,” says Donald Trump.

This is really the ugly side of America's Democracy and many are now asking what is left at all to learn from America, a country always persuading and convincing the world as a great country?

Despite Trump's thousands of admirers, he also has thousands of enemies. Ever since he became president, he has feuded with many celebrities, insulting them on Twitter.

Some of the celebrities paid back with insults, for example, apart from Rihanna, Cara Delevingne, George Clooney and Cher, among those who have insulted Donald Trump, Johnny Depp of ‘Pirates Of The Caribbean,’ fame also called Trump a ‘Brat.’