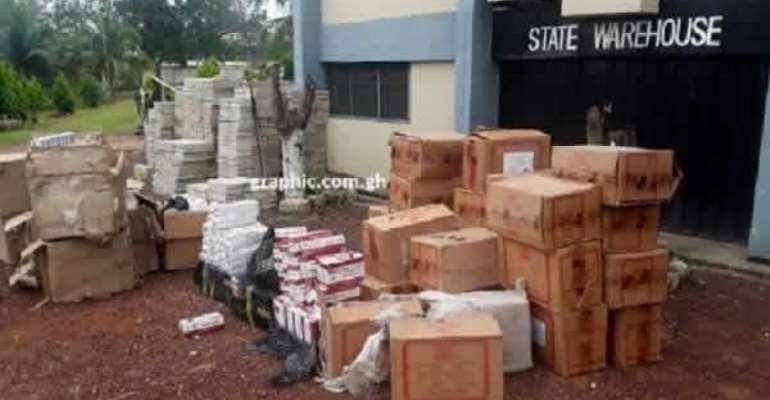 The Customs Division of the Ghana Revenue Authority (GRA) has destroyed huge quantities of banned and expired goods which were intercepted on the Sunyani-Techiman Road in August this year.

While labels on some of the products were not done in the English Language, others have expired as far back as February 2019.

Briefing the media after the destruction of the items, the Sunyani Sector Commander of the Customs Division of the GRA, Mr Daniel Mensah said the items destroyed also included quantities of packets of Viagra which were intercepted through the post.

He explained that owners of some of the goods which were wholesome but did not pay the required taxes were made to pay 300 per cent of the tax value before they were released to them.

“We made them to pay the 300 per cent tax value as a punitive measure to deter other traders from engaging in such acts”, he stated explaining that the cost, insurance and freight (CIF) value was GHC35, 500.00.

Mr Mensah said since some of the goods which were intercepted were unwholesome, “it is our duty to destroy them so that they do not enter the market”.

The Sunyani Sector Commander of the Customs Division of the GRA, Daniel Mensah, said it was unfortunate that traders flout the law by importing goods that were not sanctioned and others that were expired into the country.

Mr Mensah commended officials through whose vigilance the unwholesome and uncustomed good were intercepted.

He warned traders that officials who had been stationed on the various highways were alert to ensure that such unwholesome goods with adverse health implications were not allowed to enter the Ghanaian market.

Mr Mensah advised Ghanaians to be vigilant by checking the expiry dates of good that they buy since traders had devised various tricks to sell such unwholesome goods. Goods imported into the country should also be labelled in the English Language and those in other languages should be rejected.