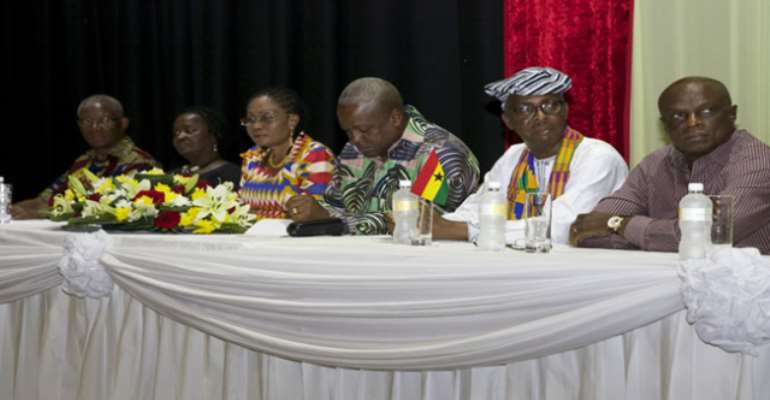 Flashback: JM takes note of questions from Ghanaian residents in Botswana, during a 2015 State visit

It is a non-topic subject on which I hope not to spend more time and space than are necessary for such a gratuitous screed against both the person and the office or government of President Addo Dankwa Akufo-Addo. This evidently clinically troubled moral reprobate is highly unlikely to go away anytime soon; not that any of us progressive democrats really give a hoot. What is significant here is not to let this reckless political prostitute and ethical scumbag get away with his morbidly determined aim and agenda of running down the visionary and unprecedently constructive Akufo-Addo-led government of the New Patriotic Party (NPP). Indeed, it is only a politically opportunistic fanatic who would so miserably fail to recognize the uncontestable fact when it comes to the subject of diplomatic conduct and democratic decorum, Nana Akufo-Addo has absolutely no rival among his generation of Ghanaian leaders and politicians, least of all in former President John Dramani Mahama (See “The Rutgers Question: Disgrace in America!” Ghanaweb.com 10/4/19).

The rather cheap and tawdry attempt to play former President John Agyekum-Kufuor against his former Chief Diplomat and Foreign Minister and, before that, his Attorney-General and Minister of Justice, will never wash. Not in this generation or the next. It never did in the past when this wretched excuse of a diplomatic afterthought attempted to pin the political treachery of Mr. Agyekum-Kufuor, vis-à-vis the abortive presidential ambitions of the late Vice-President Aliu Mahama, on the former New Patriotic Party’s Member of Parliament for Akyem-Abuakwa South. It goes without saying that the scandalous failure and/or flat refusal by Mr. Agyekum-Kufuor to endorse his two-time presidential running-mate and substantive Vice-President of the Sovereign Democratic Republic of Ghana, squarely belongs to the mischief-maker himself, and not his equally politically ambitious former cabinet appointee who, like the late Mr. Aliu Mahama, had an equal inalienable constitutional and citizenship right to gun for the Presidency.

As well, it goes without saying that faulting Nana Akufo-Addo for the patent political ill-luck of Mr. Aliu Mahama was the most absurd tack on the part of any keen observer of the Ghanaian political scene. Likewise, the rabidly anti-Akufo-Addo critic has in the recent past characteristically obtusely sought to fault the then Attorney-General and Minister of Justice for the brutal and inexcusably savage regicidal slaying of Ya-Naa Yakubu Andani, II, when it was very obvious right from the get-go that the then-Vice-President Aliu Mahama had far greater responsibility, as the second-most-powerful politician in the country, and a bona fide kinsman of the slain Dagbon Overlord, to have ensured the safety and protection of the Ya-Naa. At any rate, the purview of our national security at the time squarely fell under the authority of the Interior Minister, and not the Attorney-General, whose main responsibility was our judicial system.

And then, of course, just recently, when his stroke of leadership genius culminated in the definitive resolution of the protracted and bloody and seemingly intractable Yendi Skin Affair, also known as the Dagbon Chieftaincy Crisis, with the equally masterful assistance of His Majesty, The Asantehene, Otumfuo Osei-Tutu, II, and a handful of other eminent chiefs around the country, rather than wisely zip his “Porcine Mouth,” if he had nothing aromatically positive to contribute to this veritably inimitable and unprecedented feat, the Editor-Publisher of the long-defunct Accra Daily Mail newspaper resorted to the gratuitous and infantile tantrum of throwing spitballs at the very same man who once provided him economic refuge at his New Statesman newspaper, when Chairman Jerry John Rawlings literally wanted him dead, because some hoardings or signboards had been erected in several parts of the country commending Nana Akufo-Addo for auspiciously and definitively bringing the running sore that was the Dagbon Chieftaincy Dispute to its long overdue closure.

And now, the John Mahama hanger-on would have Ghanaians naively lap up the immitigably preposterous accusation that, somehow, President Akufo-Addo had recently engineered the deliberate exclusion of an operative of his own party from actively partaking of a Townhall Meeting that was hosted by Rutgers University, New Jersey’s publicly owned and administered flagship academy. Well, the clinically jaundiced anti-Akufo-Addo detractor may not know this, but in 2002, or thereabouts, at a Townhall Meeting with the then newly elected President John Agyekum-Kufuor, hosted by Hunter College of the City University of New York (HC of CUNY), yours truly had the microphone literally snatched away from him, hawk-fashion, just as he was about to question Mr. Agyekum-Kufuor on the widely criticized packing of his cabinet with friends and relatives and ethnic Asantes. I would later be summarily kicked off the New Patriotic Party’s USA Communications Team and shortly thereafter jackbooted from the party altogether.

Did such scandalously invidious act on the part of the Kufuor Posse effectively silence my media output or contribution towards the resonant success of the NPP in the offing? So just why does this Mahama diplomatic courier suppose that the resignation of one disgruntled party operative is apt to cancel out the entire existence and the ringing success of the New Patriotic Party? And, by the way, were the critic’s hosting of the Mahama Townhall Meeting in Botswana as successful as Mr. Harruna Attah so pontifically and self-righteously claims, why would the hearty celebrant of the “mysterious” death of the then-President John Evans Atta-Mills be best known for his infamous “Dead Goat Speech” than anything else? I mean, this political carpetbagger has absolutely no sense of shame.

FixingTheCountry Movement to march in support of Akufo-Addo'...
59 minutes ago