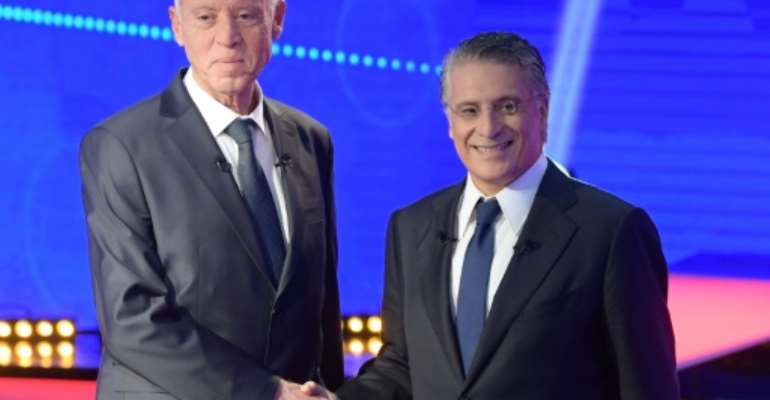 Tunisia prepared for Sunday's presidential runoff after the two finalists, both political outsiders, went head-to-head in a rare television debate in a last bid to woo the country's seven million voters.

They had both come out on top in the September 15 first round on anti-establishment platforms in a country grappling with a stagnant economy, high unemployment, failing public services and rising prices.

The debate was held just days after Karoui was released from jail Wednesday to a hero's welcome. He had been held since August in connection with a probe into money laundering and tax evasion.

Last week Saied said he was putting his campaign on hold to avoid an unfair advantage over Karoui.

Broadcast on the majority of local channels, as well as some international ones, the debate filled cafes in the capital Tunis, where a rapt, largely young audience tuned in.

"This is a dream come true. I am truly almost in tears," said Aly Mhani, a young civil society activist.

"This debate is decisive. Now that Nabil Karoui is free, I want to hear what he has to say," said Tarek Neffeti, 33.

"One thing is sure, we have had enough of the promises of the system. The advantage with Kais Saied is that he is outside of the system," he added.

While the country has succeeded in curbing deadly jihadist attacks that rocked the key tourist sector in 2015, its economy remains hampered by austere International Monetary Fund-backed reforms.

Unemployment, which primarily affects the young, hovers around 15 percent and the cost of living has risen by close to a third since 2016.

Hours before, thousands of supporters of both finalists rallied separately in the heart of Tunis, under the watch of a strong security contingent.

Tunisia's second free presidential poll since the 2011 Arab Spring revolt are the country's first to be accompanied by televised debates -- a rare event in the Arab world.

Throughout, media magnate Karoui appeared relaxed but occasionally hesitant, and speaking in Tunisian dialect he stuck to his key themes -- fighting poverty and economic liberalism.

Saied, serious but at ease, defended decentralisation of power and criticised the partisan system, delivering his answers in classical Arabic.

The runoff outcome is still uncertain, though Karoui received a boost with his newly formed party, Qalb Tounes, coming in second in the October 6 legislative elections.