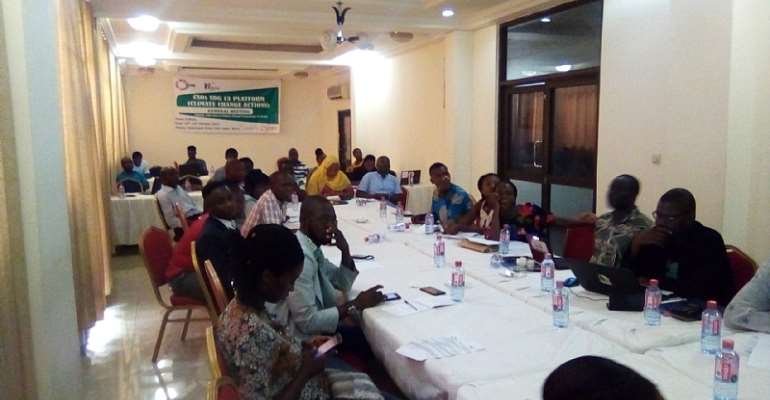 The Coordinator for ‘Kasa’ Ghana, Jonathan Gokah says the main aim as Civil Society Organizations is to work with government in ensuring the goals of Climate Change are met.

Speaking at the CSOs Sustainable Development Goal (SDG) 13 Platform general meeting on Climate Change Actions, he said the role of the CSOs on Climate Change have been brought together to form a common platform to learn and share information on climate actions that are being taken by government and how they strategize to complement governments efforts with their own local actions.

On the development of the Citizen Score Card, Mr Goka noted that it is a tool of framework which identifies Climate Actions that government has committed itself in order to undertake within a certain frame of time to which they will track whether those actions have been taken and subsequently, report to government.

“SDG 13 is a formidable front because climate effects are real and it’s a cross cutting issue that affect every part of our society. So it’s a platform that has come to stay because the number of organizations that are interested in what we do is increasing and we are also connecting with our global partner,” he emphasised.

Louis Acheampong, a Steering Committee Member for ‘Kasa’ Initiative Ghana stressed that "we’re looking at issues with respect to the government of Ghana’s Nationally Determined Contributions (NDCs) which are set of actions and indicators that are to help Ghana achieve the Climate Actions as a global agenda. And there are set of activities that have been outlined and approved by government.”

According to him, the activities agreed by government are supposed to be implemented by government itself, private sector, civil society and NGOs that are actors within the sec tor who complement government efforts.

He said as part of Ghana’s responsibilities within Climate Actions, its role is to do Voluntary National Reporting (VNR) to which the government presented their report during the last high level global meeting held last month in the USA.

A Steering Committee Member for ‘Kasa’, Chibeze Ezekiel said after the conference, it is expected that, " they will be more organized to put together their energies and talents and leverage on their resources to show that CSOs can also contribute to the achievement of SDG 13.”

The CSOs SDG 13 general meeting on Climate Change Actions which was supported by CARE International was held on October 10 and 11, 2019 at Ampomaah hotel, East Legon, Accra.