A German-Ghanaian Pastor, Arrested In Hamburg Under Suspicion Of Human Smuggling

...a strike by the German Federal Police to combat organised smuggling crime
By Francis Tawiah 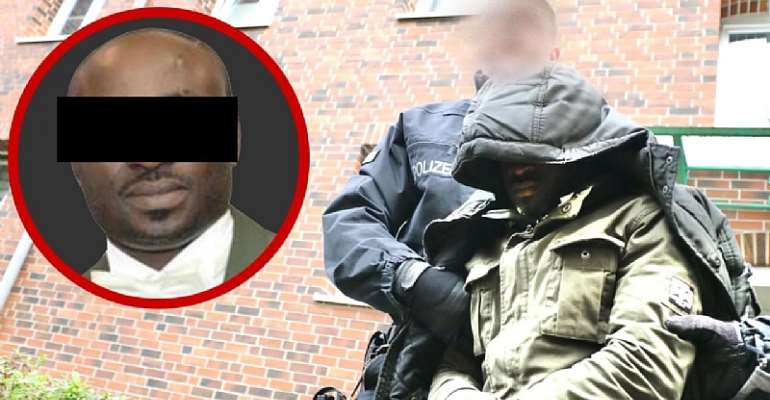 The Federal Police Inspectorate for Combating Crime in Hamburg, in coordination with the Hamburg Public Prosecutor's Office, today executed an arrest warrant and five search warrants in Hamburg with around 100 emergency personnel. The operations were supported by several operations of the Federal Readiness Police Department in Ratzeburg.

The German-Ghanaian Pastor, lived a bourgeois life in a quiet side street, in Horn, a district in Hamburg. He has been a respected pastor of a free Christian community in Hamburg-Billbrook. But the public prosecutor's office is certain...in truth, the German-Ghanaian Richard O.-W. (43) works full-time as the head of a locksmith (human smuggling) gang.

The police measures were directed against a German-Ghanaian group of perpetrators on suspicion of the commercial smuggling of foreigners into Germany, commercial receiving, falsification of documents, obtaining false official IDs and misuse of ID cards.

The Pastor Ghanaian with a German citizenship is accused of having smuggled mainly Ghanaian citizens by air from Ghana into the Federal Republic of Germany to Hamburg. The accused apparently used real documents of Ghanaian citizens living in Hamburg, Ghanaian passports obtained by indirect false certification as well as stolen blank documents and residence permits to smuggle in people. Following the smuggling, the sexes were given a new identity by the accused, for them pursue unauthorized employment. The defendants demanded "smuggling charges" of up to EUR 9,000.

The findings on increased smuggling attempts, primarily by Ghanaian nationals, were based on reports from the document and visa advisors of the Federal Police deployed in Africa and the Gulf region.

The Federal Police Inspectorate for Combating Crime in Hamburg then took over the investigations in 2017. It was established that smuggling took place on different routes by air, e.g. from Accra to Hamburg.

In the period from August 2018 to April 2019, three search operations could already be carried out in connection with the proceedings, during which seven search warrants and two arrest warrants were executed. Further investigations have now enabled another warrant to be executed and further search warrants to be obtained.

The German main defendant of Ghanaian origin, against whom the arrest warrant was executed, had already appeared as a smuggler in previous investigations. At first he worked as a "pastor" in a Christian religious community in Hamburg. Since his employment contract was not extended, the accused founded a new religious community based in Hamburg. There are reasonable grounds for suspecting that this location was used as a meeting place for the accused and as a contact point for clients of smuggling operations in order to reach agreements and to carry out or prepare acts.

The persons found in the searched objects were treated by the identification service. Further investigations are ongoing.

As evidence, laptops, mobile telephones, various documents and documents for visa transport, a residence permit and various identity documents could be seized. Furthermore, cash was confiscated to secure confiscation.

The investigators hope that the evaluation of the evidence will not only provide them with a reliable means of prosecuting the criminals, but will also provide them with further starting points for further dismantling the network of smugglers. In this way, the further smuggling of people from Ghana by air to Germany would to be prevented.