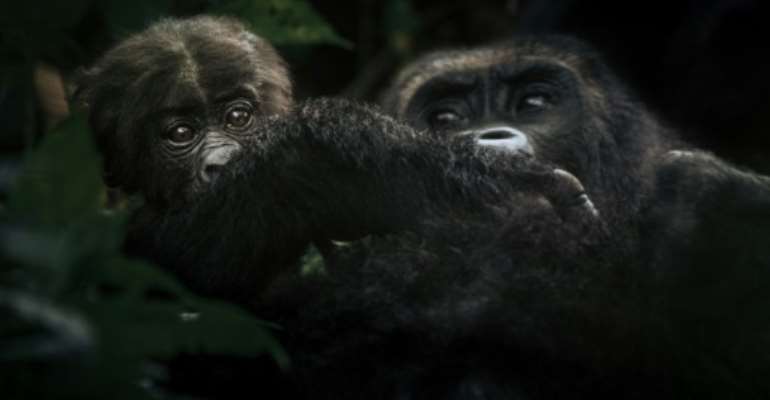 The gorillas have dwindled to just 250 in the park, their last sanctuary. By ALEXIS HUGUET (AFP)

Aged almost 17 years, Bonane is an eastern lowland gorilla, a survivor in a critically endangered species reduced to about 250 members in DR Congo's Kahuzi-Biega National Park.

For an hour each day, the gorilla and his dozen-strong family host a handful of wildlife tourists, guided by armed eco-guards.

Their home is a haven in the province of South Kivu -- a battleground for rival militias for a quarter of a century.

Trees in the gorillas' habitat are being chopped down for charcoal. By ALEXIS HUGUET (AFP)

But this refuge also faces an emerging threat from a conflict with local Pygmies, who claim that they were robbed of ancestral lands when the park was extended in the 1970s.

Last year, Pygmies began to move onto land inside the park's perimeter and started to cut down trees, mainly to make charcoal.

According to the park authorities, Pygmies have destroyed 350 hectares (864 acres) of woodland -- an act of deforestation that gnaws away at the gorillas' habitat. In 1994, the park was listed by UNESCO as among World Heritage Sites in danger.

"The invasion began in August (2018). In December, it accelerated," said Hubert Mulongoy, the park spokesman.

At least three people have been killed in clashes between the Pygmies and park rangers, although the circumstances of the deaths remain unclear.

The grave of a ranger killed on duty. By ALEXIS HUGUET (AFP)

In Munyange village on the edge of the park, Pygmy chief Jean-Marie Kasula said his community had simply "decided to return to our land in strength".

The interview was abruptly cut short by Kasula when he angrily rejected questions he deemed "political."

Underpinning his response is a complex story involving powerful men and long-standing resentment, mixed with a high-octane election year in 2018.

The park's management say a community of about 6,000 Pygmies living on the edge of the park have been egged on by influential figures in the region.

Army officers, provincial ministers, members of the provincial legislature and traders were outraged when a new park director, De-Dieu Bya'Ombe Balongelwa, set about closing their farms, located deep inside the park, after his appointment in April last year.

"There were armed men on the farms. These were purely military operations," Balongelwa told AFP.

"The farmers vowed to use every means to undermine us. Using the Pygmies to come and destroy the park is one of them," said the director, who is given round-the-clock protection by two armed rangers.

"I've done what others didn't dare do."

Marine Gauthier, a university academic and consultant in forestry management, said it was "plausible" that the Pygmies were being manipulated, "but that doesn't detract from their long-standing and genuine anger."

Park authorities say some Pygmies are among the ranks of the rangers and are doing what they can to ease the conflict.

The deforested zone is a tiny slice of the protected terrain -- a tropical highland treasure almost the size of Delaware, extending over 6,000 square kilometres (2,300 square miles).

The park reaches up to neighbouring North Kivu and Maniema, largely lawless provinces where militia violence, poaching and illegal traffic in minerals are rampant.

But the conflict and the chopping down of trees affect the showcase region of the park: its higher ground that is home to gorillas accessible to the well-heeled visitors, who typically number about 2,000 a year.

The front line is scarcely an hour's drive from the provincial capital Bukavu, located in a densely populated region like everywhere on the shores of Lake Kivu.

Rangers from Kahuzi-Biega National Park visit the devastated areas of the park. By ALEXIS HUGUET (AFP)

The demographic pressure is apparent all the way to threatened land in the park.

Residents cut down trees and burn wood on the spot to make "makala" (charcoal) -- the sole source of fuel for many rural Congolese, who are extremely poor and have no access to electricity.

On a stripped tract of land, women flee at the sight of rangers, running with heavy bags of makala, which they can sell for the equivalent of $20.

With journalists looking on, chief ranger Chadrack Kasereka spoke firmly to the women.

"I told them to stop illegal activities in the park," he said. "They have been told to pass on the message."