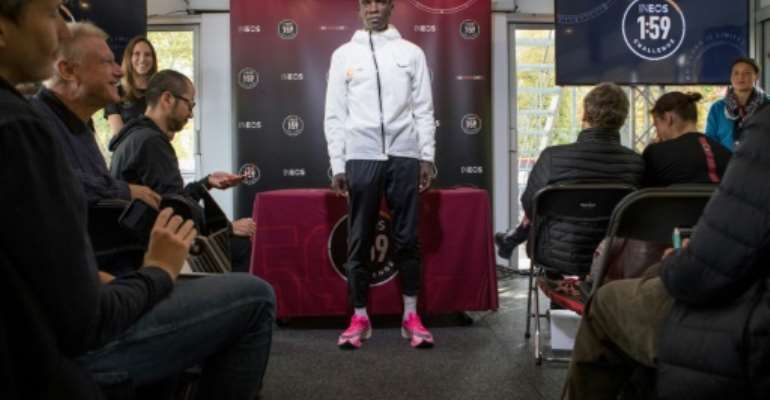 Kenya's Eliud Kipchoge will attempt to break the two-hour barrier on the October 12, 2019 marathon in Vienna. By ALEX HALADA (AFP)

He has compared it to aiming to be the first man to land on the moon.

Kenya's Eliud Kipchoge is preparing to bust the mythical two-hour barrier for the marathon on Saturday -- albeit on a specially prepared course and with pacemakers supporting him.

"I just have to make that click in people's minds that no human is limited," the 34-year-old Olympic and world champion told a press conference earlier this week.

He said his attempt in a huge park in Vienna is about "making history in this world, like the first man to go to the moon".

Kipchoge holds the men's world record for the distance with a time of 2hr 01min 39sec, which he set in the flat Berlin marathon on September 16, 2018.

In May 2017, he already tried to break the two-hour barrier, running on the Monza National Autodrome racing circuit in Italy, but at 2hr 00min 25sec failed narrowly.

But this time he says he is mentally stronger and more confident.

Organisers also say all is set in the Austrian capital where Kipchoge's course in the Prater park has been specially prepared to make it as even as possible.

Because of the way the run is being set up and paced the International Association of Athletics Federations will not validate the time as a world record.

The surface has been partly retarred and prepared with other features such as a banked corner that can save time and avoid injury.

Pacemakers are taking turns to support him throughout the 42.195-kilometre (26.219-miles) race, which includes a 4.3 kilometre-long straight alley, which he will run up and down several times.

Kipchoge, whose family has accompanied him to Vienna, said he was trying to "stay as calm as possible".

"The course is extremely good. I'm happy with the course," he said earlier this week.

Weather conditions are expected to be favourable with very low wind speed and no rain, according to organisers.

Fan zones have also been set up along the course. AFP has not been granted permission to film the run itself.

The course has been readied so that it should take him just about 4.5 seconds more than on a computer-simulated completely flat and straight path, according to an analysis by sports experts at Vienna University.

In total, he will only have to descend 26 metres in altitude down and climb 12 metres, the experts said.

The founder of the main sponsors, Ineos, British billionaire Jim Ratcliffe, is taking a personal interest in the challenge because he himself competes in Ironman triathlons.

The world marathon record has, for the past 16 years, been contested uniquely between athletes from Kenya and Ethiopia. The two nations are also fierce rivals for distance medals on the track.