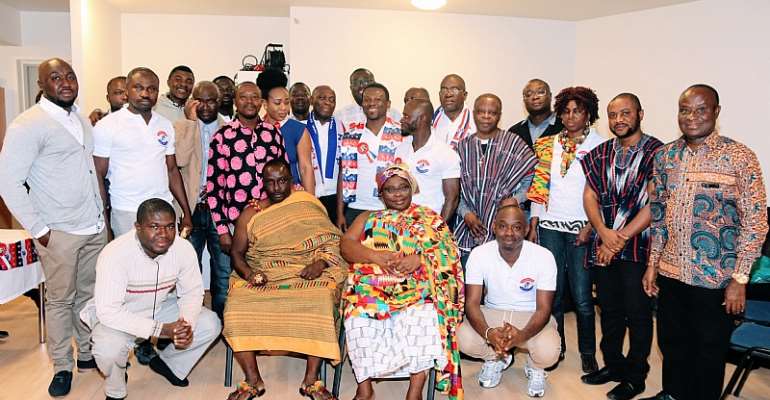 Ghanaians in the diaspora have once again reaffirmed their confidence in the Akufo-Addo government. This was the case when Sammi Awuku, the National Organizer and Emmanuel Attafuah-Danso, the Director of International Affairs of the NPP visited the Finland Branch of the Party and the Ghanaian community in Helsinki from 8th-9th October 2019.

The people were full of praise for the government especially for delivering on its promises of Free SHS and restoration of the teachers and nursing training allowances. They narrated how these policies have lessened their financial burdens.

Sammi Awuku used his first visit to Finland to assure the Ghanaian community of the commitment of the NPP government to deliver on the rest of their manifesto promises. He recounted several of the achievements that have been chalked in less than three years in government which includes 805 projects at various stages of completion with the view to eradicating the double track system in SHS within two years, planting for food and jobs which has made Ghana a net exporter of plantain to neighbouring West African countries, 350 dams which are at various stages of completion in fulfilment of the promise of 1 village 1 Dam , not forgetting the revamping of the railway system in the country.

He was quick to add that Ghanaians will see the benefits of the 1D1F policies in few years.

He further assured that Government is using all state investigative agencies in dealing with corrupt officials of the John Mahama administration.

He indicated that 21 people are currently facing trial to account for various acts of corruption and embezzlement amounting to almost GHc 800 million.

He admitted that government recognizes the wheel of justice is grinding slower than expected but Akufo-Addo’s resolve in prosecuting corrupt elements and nation wreckers in our society is not in doubt.

He encouraged the people to be patient while the Electoral Commission puts in place enduring and widely acceptable modalities for implementation of ROPAA to enable Ghanaians abroad participate fully in deepening Ghana’s democracy.

He further encouraged them to take full advantage of the 1D1F programme whiles assuring of government support. In his words, the economy is on a stable footing and, with the end of Dumsor which collapsed many companies under John Mahama and his NDC administration, the country is ready for an industrial take off.

The National Officers of the NPP used the opportunity to provide orientation for the Branch Executives in Finland in a separate meeting and thanked them for their immense financial contribution in securing victory for the party in the 2016 elections.

Mr. Osei Amoah, the Chairman of the Finland Branch was happy to host the delegation and asked for more of such visits in future.

The Branch Chairman also expressed gratitude to the Akufo-Addo government for the reduction in import duties. The Finland Branch is poised for a resounding victory for the party in 2020.